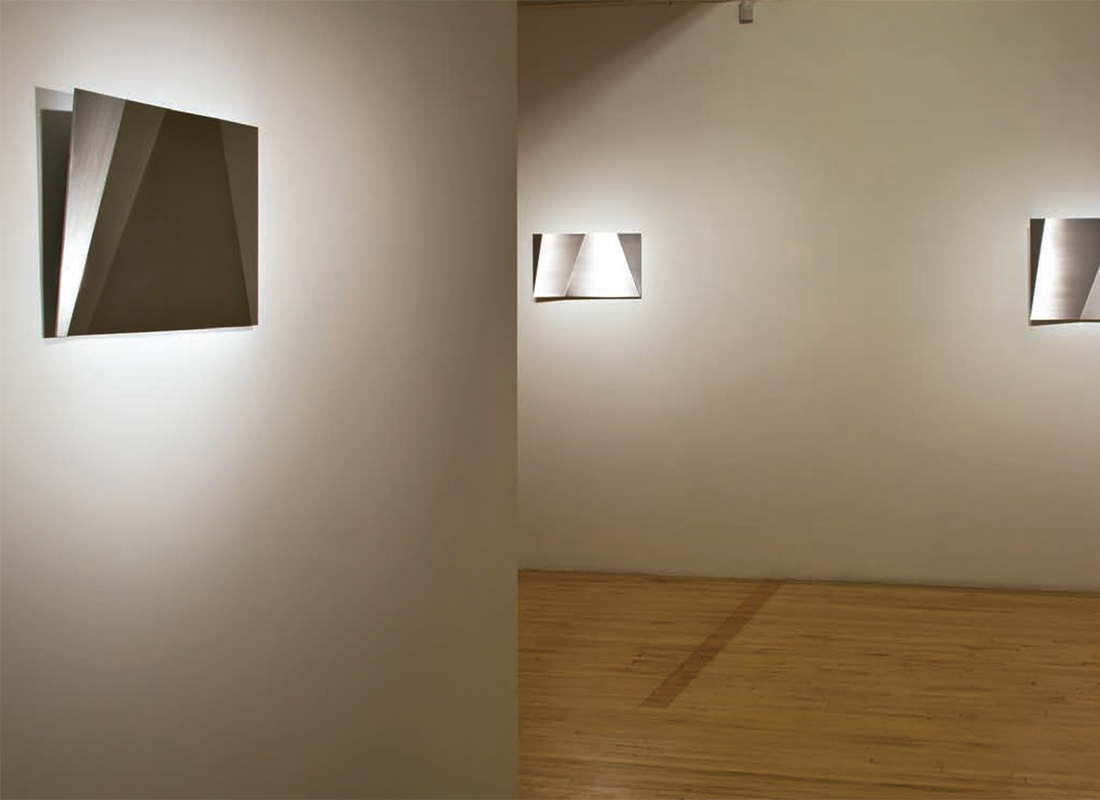 Roland Poulin’s sculptures exist in a space somewhere between order and disorder where light and surface effect play on form with what seems like a Minimalist aesthetic. Over time, Poulin’s sculpture has gone beyond the strictures of Minimalism and what looks like visual order is subtly destabilized. The two vertical human-scale forms in Ultime dialogue  at Battat Contemporary unfold, and as we walk around them their lines and geometries appear to change perpetually, according to where we stand in relation to them.

The subtle perceptual shift is due to the delicate, almost lyrical angles of the flat surfaces that are more like planes or areas. This modulated shifting is what Poulin refers to as his “Baroque” tendency. Some surfaces reflect light. Others have darker gradations. The total sculpture, in this case two forms that exist in relation to each other, and their relation to space is less as object, in the Minimalist sense, than forms that engage with the space. Poulin’s abstract sculptural sense is what gives his art an economy of language and effective use of materials. Here, the monochromatic grey-silver enhances the uniformity of these forms. The variations, angles, all hold together quite well.

With the small wall pieces, which are like reliefs, the brushed aluminum surfaces have layers of steel plates. The strata of the horizontally arranged plates, set out as variations in each piece, make them look almost like abstract landscapes. The multiple plate assemblage effect, totally visible at the edges of each composition, makes us aware that each piece is an agglomeration of unseen plate structures. There are elements we cannot see in their entirety. Under the surface becomes an artist’s play on and with the use of materials. The surfaces of the wall relief sculptures were etched by creating a wash or sweeping effect, using cloths that etch this motion onto the plate surfaces. Light brings these monochromatic wall sculpture reliefs to life in the gallery environment.

Earlier works such as those exhibited in Poulin’s solo show at the National Gallery of Canada in 1994 were poetic, and moved gesturally, subtly in the gallery environment. Built out of dark black beams that moved through the space as abstract forms, they recalled Robert Morris’ sculpture environments from the 1960s and early 1970s, but Poulin’s had a subtlety, even lyrical intricacy not seen in Morris’s minimalist object-oriented sculptures. Poulin’s convey a fine tuned interiority and as he has commented, “I am concerned with working on the horizontal level, ground level, integrating it as a part of the sculpture. You get the feeling that my sculptures rise out of the ground or else sink into it. The ground is no longer a neutral space: it’s the space that the sculptor and the viewer share.” 1

Like those works, Poulin’s recent works at Battat address broader themes of spirituality, of life and death. We become aware that Poulin was not only influenced my minimalism, but also by ancient Egyptian sarcophagi, and cemeteries in New England and Paris as well. Minimalism was about non-relational siting, removal of context for the in situ sculpture. Ironically in Ultime dialogue, Poulin seems to have evolved the language of minimalism to embrace context. Environmental, contextualized and about the human scale, Roland Poulin adapts a language of the 1960s to develop a dialogue on continuity that involves sculpture’s ongoing relation to context and history.

The wall reliefs at Battat Contemporary are akin to painting. Minimalist artists often compared their sculptural style to that of abstraction in painting. Compared to Poulin’s exquisite Serra-like drawings, these new wall works have a relation to human scale, the scale of the body, as did Antony Caro’s sculpture. We find parallels there, as we do with David Smith who built his language of sculpture structures. Poulin embraces structures, but with a sense of the post-Minimal context of today’s art.

In Extenso (2005) a recent Poulin piece in the Musée d’art contemporain de Montréal collection plays with structures within structures. Interestingly the common 2” x 6” length of wood one would find in a lumberyard is the standardized assemblage element for the piece. Chance also plays into the piece. The dialogue is with wood, a material any of us can identify with. The variations in the woodpile are as intricate as a Bach variation by Glenn Gould and Poulin plays with placement and visual locution like a master with this generic material. Aesthetics and the everyday — the woodpile and the cast bronze art sculpture — leads to a dialogue on what structures actually are and how we perceive them. Each element in the woodpile, a sculpture made of structures of 2 x 6 inch wood could be perceived as structures within a composite non-structure. Composed of multiple object elements, In Extenso has become a single object with an altogether different function (aesthetic) and the visual effect is no longer of a commonplace pile of  wood but of a sanctimonious cast bronze artwork.

Comparing a Roland Poulin work such as Nos regards se tournent vers la lumière (2010) created for the Promenade Samuel de Champlain in Quebec City with Carl Andre’s Joint (1968), comprising 186 hay bales in a line in Putney, Vermont, Andre is willing to sacrifice the aesthetic for the action of placing a pile of hay bales in a field in a line. Nature becomes a backdrop as if nature itself is an art gallery, a neutral field. For Roland Poulin, the Quebec City backdrop is an active part of the conception and realization of Nos Regards…, just as the gallery space at Battat is for Ultime dialogue (2012). Poulin is resolved with the site in his conception and there is a continuity there, whereas for Robert Smithson and Michael Heizer the disconnect between non-site (the art gallery) and site (outdoors environments) is intentional, preconceived. Seen in the context of his generation of sculptors, Roland Poulin’s Ultime dialogue develops out of the Minimalism of his generation to become a vernacular form that is human by intention, human in scale, and absolutely abstract. There is something sacred in Poulin’s dialogue with space and surface at Battat Contemporary. Presence and absence, light and dark, life and what supersedes life — these visible and non-visible worlds are the themes Roland Poulin touches on  with his latest sculptures.