Yam Lau: A World is a Model of the World 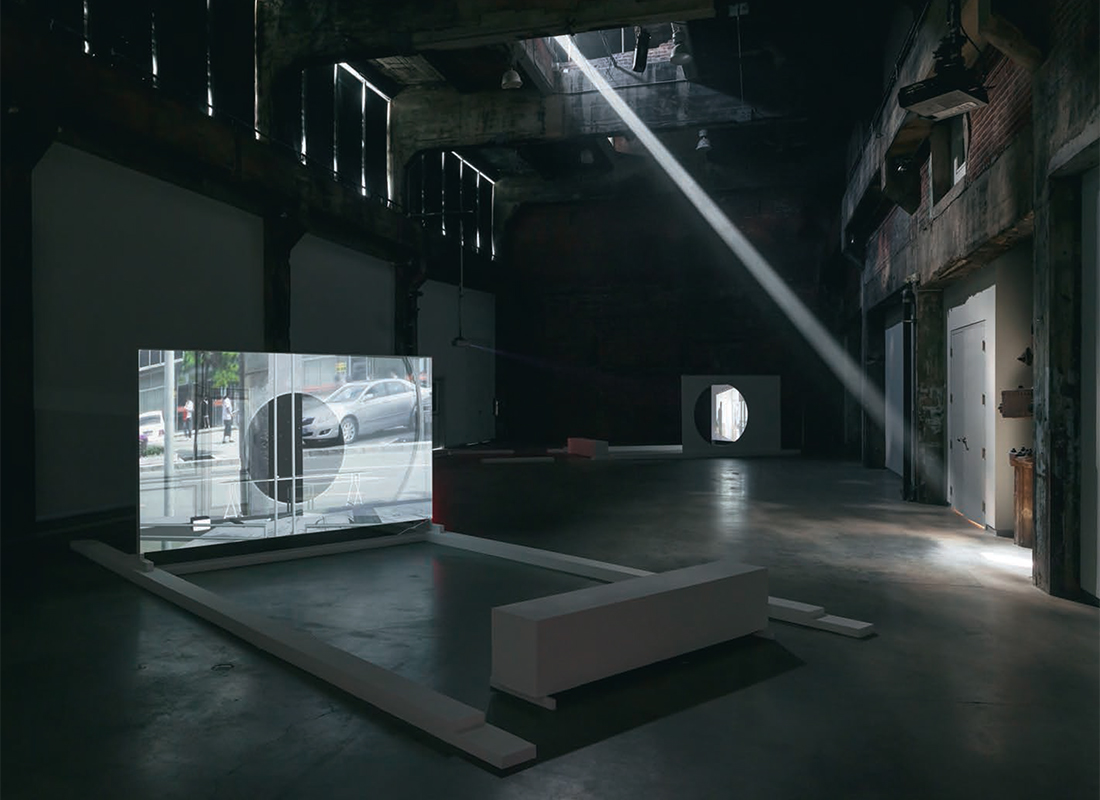 At a recent conference, Yam Lau’s work was subtly challenged as merely an exercise of digital technology and computing aesthetics. However, the artist’s latest exhibition, entitled A World is a Model of the World at the Darling Foundry in Montreal, demonstrates how a contemporary art practice in digital media can engender new possibilities for cultural and social expressions through hybridizing virtual and real spaces.

Walking into the main exhibition space of the Darling Foundry, the white architectural structures (a schematic, maquette-like construction) conflate the virtual space explored in the video with the physical space of the gallery. Lau explains his idea for the display, stating “the wooden structure that supports the video, I see it as a boat or a floating island, very  much like a pavilion floating on water. I also think that this huge space, the Darling Foundry, is like the rock gardens in Japan, its emptiness is punctured by my wooden structures. So the idea is that these two wooden structures float in eternal time.”2

Provoking a feeling of being-in-transition within multiple temporal and spatial registers, this deliberately staged exhibition features two video art installations, Room: An Extension, and Between the Past and the Present: Lived Moments in Beijing. In the former work, Lau constructs a model of his Toronto home in virtual space in the form of a cube. By projecting video images on the translucent surface of the rotating cube, the work shows an everyday scene of Lau getting up in the morning. Being translucent and diaphanous, the cube is turned into an inside-out room, showing multiple views of a singular activity simultaneously taking place. This work reveals how the use of digital animation can generate the effect of multiplicity and complexity within a video documentary of our mundane experiences.

Although of similar media and treatment, Lau’s other work, Between the Past and the Present: Lived Moments in Beijing further explores complex displacements in spatial and temporal registers. Watching it is like experiencing time travel: starting with a sequence of Lau working in a classical Chinese scholar’s studio surrounded by water under a starry night sky, viewers are led gradually to a busy street of Beijing in contemporary China (the street is also where Lau stayed when he visited Beijing). The artwork itself is a mash-up of digital animation and real life imagery. Viewers are compelled to negotiate the dualities they are seeing: the tranquil scholar’s studio flows into a busy urban setting; a material world is seen through the windows of an ethereal space. Skilfully, the video explores the past and the present, the traditional and the modern, through an indeterminate perspective that is always in flux.

More fascinating is how these two digital art installations “mirror” each other in the gallery: one video was shot in the East, a city street in Beijing, and the other video in the West, at the artist’s home in Toronto. Through such juxtaposition, a hybrid cultural identity-in-the-making is reinforced. In his 1967 lecture Of Other Spaces: Utopias and Heterotopias, Foucault states, “utopias are sites with no real place,” and by way of contrast, “heterotopias” are the places “outside of all places, even though it maybe possible to indicate their location in reality.” 3 In such “other spaces,” Foucault argued that a mirror is at the same time a utopia and a heterotopia. Like Foucault’s mirror, Lau’s complex displacement of “realities” transports viewers into a dreamlike yet familiar spatial experience.

Mirroring each other, these two works reflect a desire to see oneself as an “other,” which is significant for someone operating in a hybridized cultural position. Born in Hong Kong, Yam Lau grew up and studied painting in Canada, and has recently begun travelling from Canada to China for inspiration. The experience of reconnecting with his Chinese cultural heritage informs a timely artistic practice within a global matrix. Henceforth, the imaginary classical scholar’s studio and the Toronto home studio signal the essential freedom of a creative practice that dissolves cultural boundaries. Through the complexity of the virtual and the real, Lau situates himself freely between the East and the West, as well as the past and the present.

Jessica Li is an interdisciplinary writer based in Toronto. Born in Beijing, China, she studied marketing and management at Northeastern University China. Jessica Li moved to Hong Kong to study at the school of design at Hong Kong Polytechnic University in 2010. After obtaining her MDes in design strategies, she relocated to Toronto to pursue an MA at OCAD University, where she majored in contemporary art, design and new media art histories from 2011 to 2013. Her research interests focus on contemporary Chinese art, design and new media art.