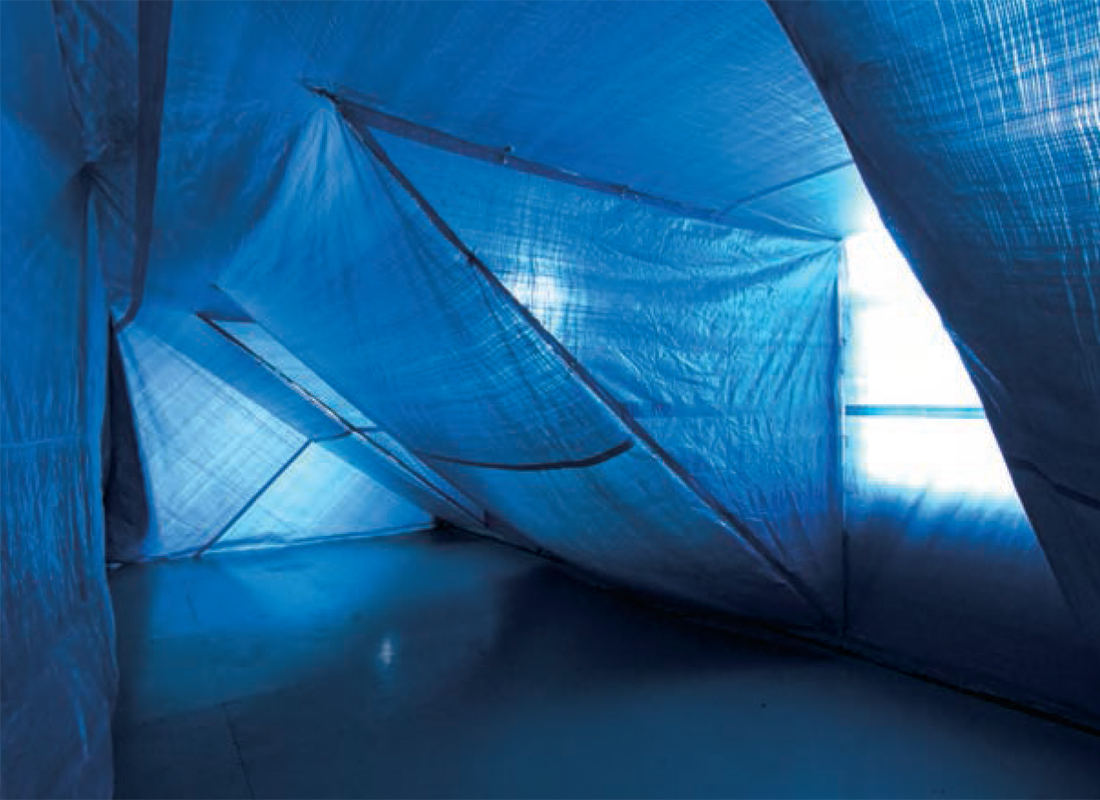 It is impossible to aesthetically approach the Visual Arts Centre of Clarington (VAC) in Bowmanville as the neutral white cube most art galleries aspire to be. The architecture of the place — 19th century industrial — and its original function as a mill simply precludes that possibility; the notion of the art gallery as a space on which an aesthetic context can be easily draped is negated by the noisy presence of the historical, for this is a building that has been adapted from another, original purpose that still lingers. And so exhibitions in this place — successful  exhibitions — must reflect or incorporate some level of cognition of the difficult and complex institutional ground that is the VAC to whatever aesthetic figure is imposed upon it.

Lyla Rye did just that with an exhibition that took over the entirely of the VAC, both inside and out. Cyclorama comprised a complex, multi-faceted installation that included a problematic video installation, and two very different but powerful sculptural elements that responded to the demands of the building interior and the gallery grounds.

It all started right at the door. Rye configured things so that entering the VAC is to be immediately confronted by, and physically enter into, theatrical space courtesy of her installation of a proscenium arch to frame our way. It is a textile structure and onto it she has projected matching images of architectural columns. Just beyond its signifying role and presence is the video work itself — Upstage, a two-minute looped piece projected onto the gallery floor — based on an old silent film by one of the true geniuses of early cinema, Buster Keaton. In Rye’s work, Keaton’s image within the filmic structure has been displaced by a circle of blank white light that moves about the floor in a manner somewhat visually akin to that of a theatrical spotlight.

Now, this is a far more complex, nuanced, multi-layered piece than I’m able to adequately describe, and involves, for example, two video monitors in another area showing works based on other Keaton films, and several digital prints.

The problem with the primary video component of Cyclorama is, alas, the gallery space itself. Rye’s projection just the other side of the critically important framing device of the proscenium arch is interrupted by the visually intrusive presence of a free-standing column in the gallery, as well as the corner of a wall. This is no blandly neutral, vacant white space we’re in; the uneven, even awkward, arrangement of the space, its subdivision into discrete areas, powerfully resists attempts at theatricality. The architecture is insistently intrusive and so denies us the ability to step past the signifier of the proscenium arch and into the magical suspension of disbelief necessary for successful theatre. The frame of the arch promises, but is denied delivering on that promise by the nagging intrusion of the physical premises. We are never able to forget ourselves and become lost in Rye’s work. Magic consequently never ensues.

Things, however, do get much better. It’s a long walk up to the VAC’s third floor loft, but the trip up its several flights of stairs and our encounter with the blank fire door on the third-floor landing does, in a way, comprise a kind of contextualizing framing device for what we are to encounter. Up here, in the gallery’s large, unfinished and airy two-storey windowed loft, Rye delivers big time. Textiles are the critically important factor, for Rye has wrought a series of interconnected sculptural variants on the idea of the proscenium arch to shape and frame our experience. They are tents, and this is Memory Palace.

Rye sculpturally reconfigured this large loft space, attuned enough to recognize that it is oddly permeated by a vaguely church- or cathedral-like suggestiveness when it’s empty, and created a series of interconnected but completely independent tented subspaces made from large tarpaulins.

There’s a truly overt architectural sensibility at work in the spaces Rye has created, for each of the tents comprises a different, recognizable shape — a shed, a gazebo, etc. — and each is contextually cognizant of the larger, enveloping space within which it exists. One of the spaces done entirely in blue tarps, for example, cleverly creates false dormers for the windows, punctuating one of the loft walls, powerfully altering the space with the suggestiveness of a slanted roof that in fact doesn’t exist. Perhaps all of this could be likened to the cosmological notion of the multiverse, if you will, to the idea of a series of independent, unique “baby” universes, blooming within a larger envelope. Rye’s mini-universes interconnect with one another yet are utterly autonomous, each space delineated by a unique sculptural shape and by a discretely individuated colour — red, green, orange, blue — yet easily passable from one to the other with the simple lift of a tarpaulin.

And, the maze-like path through each tent leads to a central space. Here, white tarpaulins shape an arched room, which is traversed by one of the loft’s heavy wooden beams and onto which Rye has installed a pair of large fans to maintain the rounded arched shape of the tarpaulins. This core space both includes and reiterates the secular architecture of the VAC’s loft, but is cognizant of the spiritually suggestive shape of the loft. But no matter your take on its meaning, it’s a space that is in fact dependent on our belief: a belief that there is indeed something to discover at the end of the road/maze, that there is an end goal that can be achieved by embarking on something resembling a quest (albeit a minor one, but a quest nonetheless) to find your way through the maze and physically encounter the “secret” that lies at its heart.

Outside the building just along a path that follows the course of Soper Creek, which demarcates the edge of the VAC grounds, Rye has installed Tether, a sculptural installation. This work is the latest instalment in the VAC’s ongoing Art on Public Lands series and will remain in place for a year. It’s an elegantly simple work: she selected three adjacent mature maples trees at the edge of the path, and then chained them all tightly down. Rusted steel chain links extend from anchors set deep in the ground in a circle at the edge of the trees’ root balls right up and up into their branches close to the trunks.

It makes for a kind of stylized, inverted root system, linking the tree to the ground, which provides it with both support and organic existence. But Rye has bigger proverbial fish to fry. She’s aesthetically fixing context in place, but concerned less with rooting it in the soil around Soper Creek than she is about rooting it in our minds. Tether is intent on reminding us about place, making us alive to it. Chains carry heavy symbolic weight, typically having to do with either the negative notion of the denial of freedom, or the somewhat more positive idea of trying to prevent something precious from being stolen. Rye opts for the later, reminding us of the tenuousness and provisional nature of place, and that this minor little micro-environment surrounding the VAC could all too easily be taken away. Transforming its living trees into sculptural objects (albeit, temporarily) by encompassing them with an aura of precious things kept under lock and key powerfully denotes how truly elusive a place can really be.

Gil McElroy is a poet, critic, and independent curator living in Colborne, Ontario.