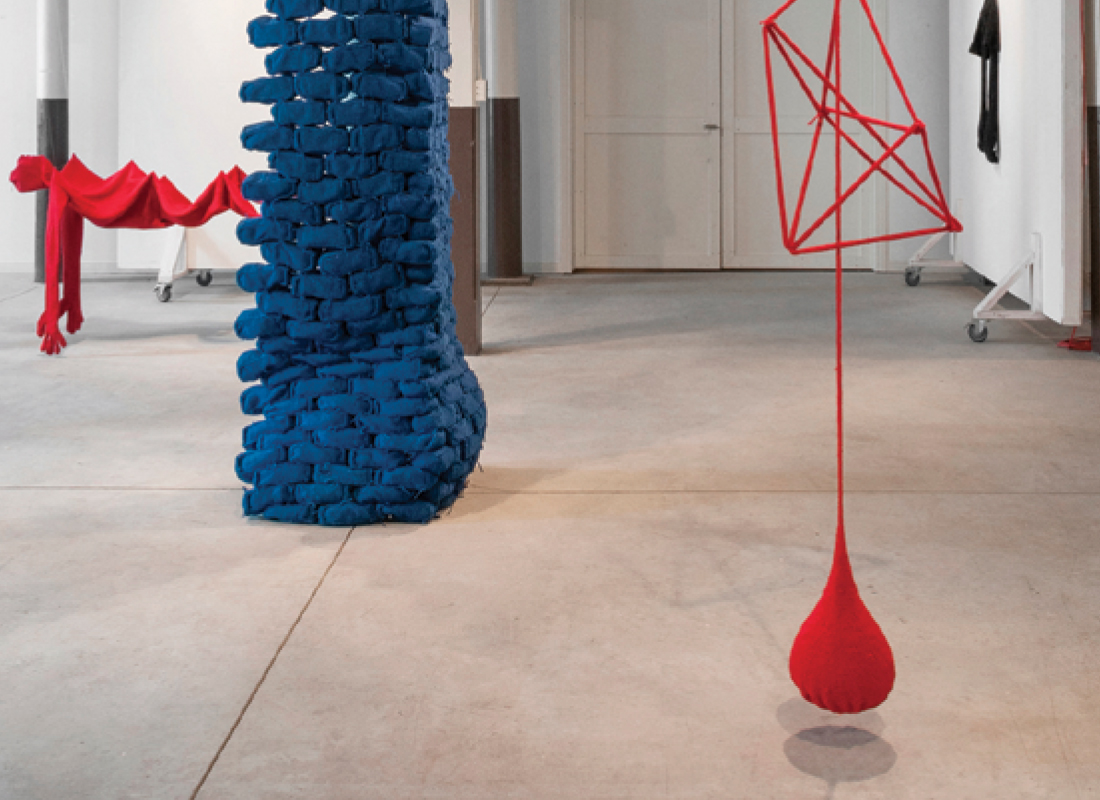 The long-term effects of war on people’s personal lives are difficult to envision for those of us who have never experienced its violence. I try to imagine it as a pin-prick hole in a tiny vein that refuses to heal. It leaves drops of blood forming a red line that becomes entangled in each and every endeavour of a war’s victim. The strands of red yarn in Bozica Radjenovic’s sculptural installations and performances and the red lines of her drawings planted this image in my mind.

Radjenovic was born in Belgrade, Serbia. She had just graduated as a sculptor with an MFA from the University of Arts in Belgrade and was actively exhibiting and achieving critical attention for her work, when the Yugoslav civil war broke out in 1991. Two years later she moved to Canada. From this powerless but safe distance, she watched the war go on for years and finally play itself out in 1999. All that time, the brutal way in which her life had come apart, rendered her mute in her chosen profession. In Serbia, she had been exhibiting her rough-hewn wooden figures. In Canada, at the end of the nineties, some similar sculptures began to appear again, now with rope and twine strung through and around the wood. The string inspired the artist to consider knitting as a viable method for making sculpture. Not only could yarn, with its endless twirling lines, reflect the complex intermeshing of the past and present, but knitted work has a practical advantage over wood: it can be stuffed into a suitcase and taken back to Serbia from where, in the 2000’s, invitations to exhibit began to arrive.

In an era when knitting circles have resurfaced in coffee shops and yarn bombing has reclaimed public space in all parts of the world as a feminine and generally harmless kind of graffiti, it takes a sculptor to create works of yarn that stands out from this crowd through a creative use of the material’s metaphoric strength, (its warmth, security and connectivity as well as its unravelling). The formal strength of Radjenovic’s work, as well as her exploitation of the medium’s humorous and poetic possibilities, was amply proven in a recent exhibition at the Mississippi Valley Textile Museum in Almonte, Ontario. Many of her knit works and some wood sculptures from recent years were shown in the well-suited surroundings of this historic stone building, where from the 1860s to the early 1980s yarn was spun and cloth was woven.

In the last dozen years, Radjenovic has gone through many skeins of yarn. A blood-red line continues to appear in these works that show, as she writes in an artist statement: “[a] readiness for quick evacuation and being constantly on the move.” In Red Root or Sweater for Poor Blood Circulation, (2009), threads at the end of a cluster of tubers dangle in various directions, as if hesitantly finding their way in a strange environment. A tightly wound ball of yarn is connected to loose stitches at the top of the sculpture, on the ready, it appears, to unravel these roots at any time.

The cracked surfaces of the ageing gallery walls emphasize and extend Radjenovic’s complex lines. Against the backdrop of peeling paint and plaster, Slapping Hands (2011), four knitted hands suspended from the ceiling by invisible thread, look animated, as if engaged in organizing some sort of transaction. Straight, determined lines run from the tips of the fingers down to the ground. Once there, however, plans go astray and the yarn forms unpredictable, bewildering patterns that match those created by the organic decay of the wall.

Yet Radjenovic is not fixated on the past. The additive property of knitting as a sculptural medium with which, stitch by stitch, new shapes are created forms a parallel to the way in which she, as a displaced person, reconstructs her life in her adopted country. Hand (2012) shows a carved wooden hand holding a blue tube of yarn pulled down by a weight at the bottom. However tenuous its grip, it shows a remaining faith in taking matters into one’s own hands. Radjenovic exploits the medium of knitting in a forward-looking way, albeit guardedly. Floppy blue knitted bricks, strung together with fishing line, are wrapped around a column to form a wall. Wall (2010-2011) suggests a longing for security, but the ironic use of soft wool for protection acknowledges the impossibility of shielding oneself from violence.

Working in wool has given Radjenovic a language to communicate her sadness about the destruction of her country, but the yarn has also brought back sweet memories of family connections, of childhood and of her mother knitting sweaters. The two-sided significance of yarn in her work became particularly clear in a performance piece, which took place in several locations in the summer of 2013. A red knitted body covering that left only her lower legs exposed was its central artefact. At a group exhibition at Quartair Contemporary Art Initiatives in The Hague, she wore this startling costume, which slowly unravelled while she walked around two pillars in the gallery. Remnants of the garment, hands, arms and head, were used in a performance at the cooperative Blink Gallery in Ottawa, one of the artists’ groups that provide a new sense of community for Radjenovic. Here, during Nuit Blanche, she invited people to sit down at a table with her. She offered visitors a drink and asked them to unravel her costume and wind the yarn around their drinking glasses.

A video of this performance, Unraveling Tension (2013), is given a sculptural treatment in the Almonte exhibition: a knitted net covers the projection and emphasizes the importance of social interaction in constructing and re-constructing individual identities. While the blood red line of trauma continues to affect Radjenovic‘s work, in the twenty years since she witnessed the destruction of her country, her painful memories have led to an empathic concern and deep understanding of the importance of connectivity between people.

Petra Halkes is an artist, independent curator and art writer who contributes regularly to Canadian art magazines. In 2006, she initiated RIA (Research in Art) with her husband René Price. Based in their home in Ottawa, RIA hosts artist’s projects and Salons. http://researchinartottawa.wordpress.com/