Sculpture of Steel, City of Nerves. A review of Dendrites by Michel de Broin 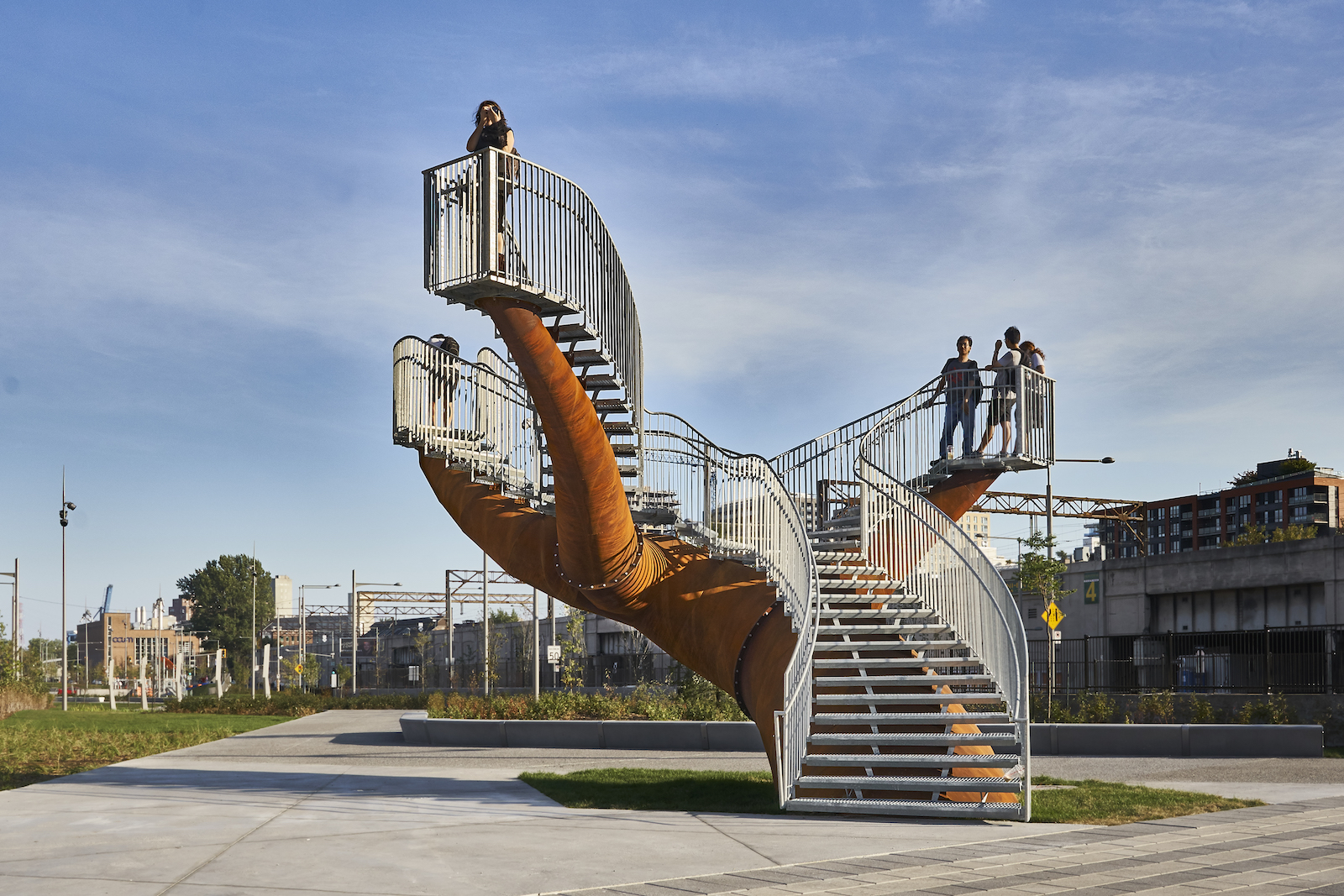 Dendrites, a public artwork recently inaugurated along with its site— Place de l’Aviation-Civile-International —is a fascinating and consistent extension of Michel de Broin’s ongoing and prolific art practice. In fact the work combines two elements that are characteristic of his multifaceted approach. In the first category, the artist has followed a method whereby he repurposes various urban entities, often related to traffic and transportation, into creations in which their original function has been rendered inoperative in order to present an eye-catching and thought-stimulating object that has no other purpose but to trigger purposeless contemplation and the reflection it may give rise to. This category is comprised of generally large-scale public works, such as the collecting and reassembling of lampposts ripped away by hurricane Katrina (Majestic, 2011, Ottawa), the absurdist rerouting of street signage (Entrelacement, 2001), the surprising reworking of spiral staircases (Révolutions, 2003, Montréal) or performative works that toy with the functionality of road vehicles (Shared Propulsion Car, Toronto and New York, and Keep on Smoking, Berlin, both 2005), among others. The second category consists of a series of museum-suitable works in which the artist either repurposes, often humorously, various aspects of symbolically charged everyday objects or reflects on contemporary socio-political issues (Étant Donnés, 2015, Black Whole Conference, 2006, and Engine, 2006), to name but these. Dendrites effectively fuses elements of both these categories.

On one hand, like many of the artist’s previous works, Dendrites repurposes functional elements (stairs and platforms) in a highly frequented and traffic intensive public space. For example, the repurposing of an urban structure (the stairs), which is normally designed to facilitate and guide pedestrian flow through public space, here becomes the vector for an inoperativeness in which the viewer is invited to take a step back from the frantic, nervous rhythms of the city and reflect on or simply admire the complex urban system looming and pulsating all around him or her. On the other hand, the sculpture functions on a sustained symbolic register via its multileveled referencing, ranging from dendrites and their function of receiving incoming electro-chemical impulses, to tree-like forms contrasted with the surrounding urban space, and to the notion of traffic flows traversing the cityscape and so on. More specifically, the sculptural installation modifies this pivotal passage point—signalling the end of the Bonaventure expressway and indicating one’s entry into Montréal—by providing a visual attractor that detracts from, and somewhat mitigates, the unattractiveness of the concrete behemoth, just behind it on the northwest side, that is the self-enclosed Brutalist-style Place Bonaventure building. Echoing the multileveled non-identical twin structures (the north side sculpture has 62 steps, while the south side boasts only 40), these functional détournements and symbolic ramifications can be viewed as several interconnected readings according to the perspective one adopts.

In an opening perspective, Dendrites, by virtue of its name (derived from the Greek for tree branching) and its natural ochre trunk-like forms, can be said to speak to the dichotomy between urban space and the natural land within which the city is an island of sorts. With its curvilinear forms, warm colours and organic textures the sculpture thus contrasts with the rectilinear lay out of concrete, steel and glass urban mega-structures and infrastructures that fan out in front of viewers’ eyes on all sides. In yet another reading, perhaps the most fascinating and least immediately obvious, Dendrites also directly addresses the notion of the gateway, this portal between two distinct spaces. Of course, due to its location at the end of Bonaventure expressway and its proximity to the Montréal Central Station, the newly erected sculpture literally marks a neuralgic transition space between downtown Montréal and its outlying suburbia, rural areas and vast natural land that stretches endlessly all around it. But, symbolically it branches out further. The artist’s adoption of the dendrite as a model is indeed a very clever symbolic choice, as the specific function of this nerve cell part is precisely to be a portal, an entrance vector that receives nerve impulses fired electro-chemically across synapses by neighbouring axons (the nerve cell parts with an impulse transmission vocation). In magnifying and aesthetically transposing this impulse-receiving function to this busy traffic hub and its incessant inflowing fluxes, the works opens several other captivating interpretive avenues.

In my view, the most exciting of these is the analogical overlap between the impulse-receiving activity of dendrites and the city as a complex technological system, which is knowledge driven, i.e. it is the result of applied human intelligence to construct a living and wealth generating space in the face of an inhospitable natural environment. Moreover, one can extend this to another level by making an analogy between the extensive electrical grid, which underpins and propels the modern city’s daily activities, and the action of the dendrites’ electro-chemically driven nerve impulse reception. In a more phenomenological approach, one also could say that the sculptural installation invites and induces a particular experience that resonates with the symbolic dendrite reference. In climbing the steps of the structure and taking in the sights, it is in a sense the sculpture itself that facilitates and triggers this experience of the cityscape. As such, the sculpture acts as an impulse- activating interface whereby the incoming signals (sights, sounds, even smells) are modulated through the viewer, who can thus be likened to an axon, or an impulse transmitting agent. By way of the sculpture, one thereby is led to reflect on the incoming and outgoing neuronal impulses that (literally) generate our state of mind and perception of the world.

With Dendrites, de Broin has once again demonstrated the potential of art to activate impulses beyond purpose: as well as enabling us to look anew and otherwise at our world, it allows us to become inoperative in our contemplation before its marvels and horrors, and to reflect both upon what it is and what it could become. Clearly Dendrites is a superbly executed, aesthetically energizing and symbolically far-reaching work that contributes marvellously to a new envisioning of this, far too long neglected, entry portal to Montréal. That being said, I do have one minor reservation regarding the choice of unpainted grey galvanized metal for the stairs, railing and platform structures. Though the winding form of these extensions works quite well in conjunction with the Corten steel mother structure, it seems to me that a material of another colour, for instance, oxidized bronze-green, or a surface painted in similar hues, would have been more complimentary with the rusted orange tones of the main sculpture and that the whole would have consequently blended together better as a single unit. As it stands, these interaction-inducing structural elements appear to be more of a functional add-on (albeit purposeless) than an integral formal sculptural component with its inherent material and aesthetic qualities. This choice of material was perhaps dictated by extra-aesthetic factors, such as the stringent safety requirements stipulated for such a public work, or the prohibitive costs of a more noble material, such as bronze, or the upkeep-intensive expenses occasioned by a painted surface, or it may have been simply driven by a well-founded artistic decision. Regardless, Dendrites is a fabulous and far-reaching work that invites a wide scope of readings, actions and interpretations for viewers and at the same time, makes a significant and thought-provoking contribution to improving and embellishing the city’s urban fabric. This erection of a symbolic and aesthetically stimulating portal aims to fire the dendrites and axons of citizens as they meander into or out of the complex system of fluxes and interconnections that drive the city of Montréal forward.

Bernard Schütze is an independent art critic and curator. His essays have been published in numerous art magazines and he has written various catalogue articles and artist monographs. He also has given talks at art-oriented events mainly in Canada and Europe. Originally from Germany, he has been living and working in Montréal since 1985.