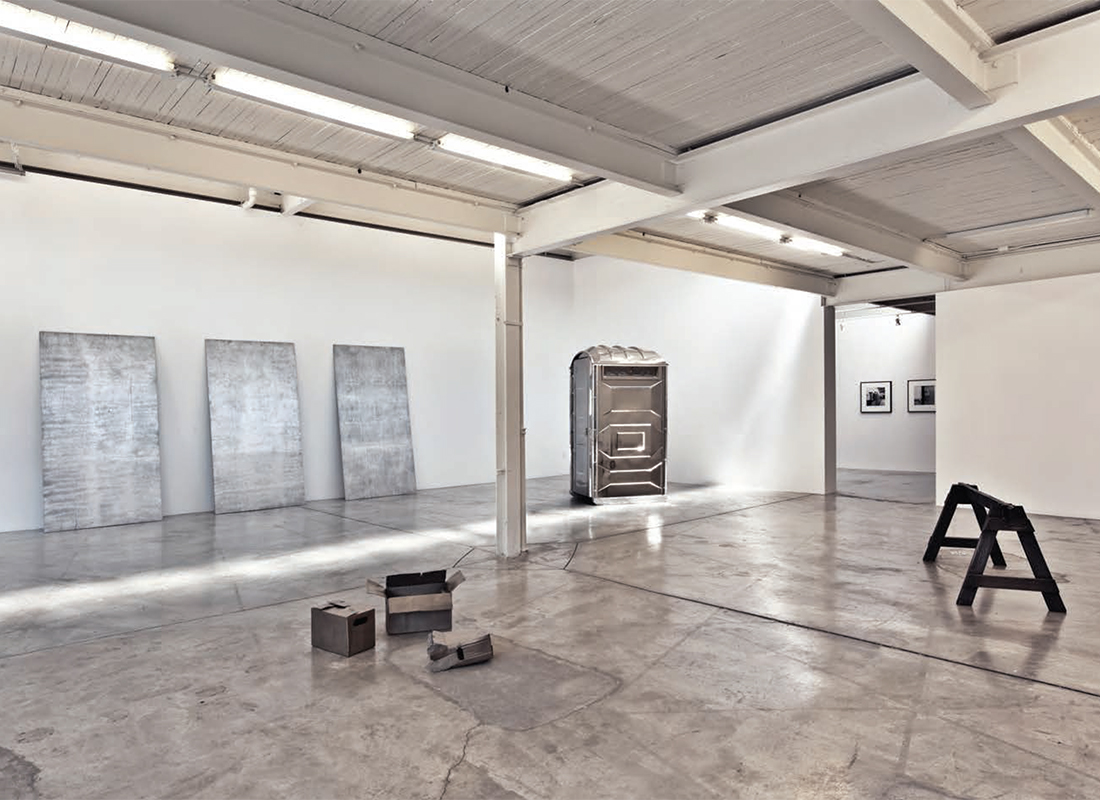 The Nova Scotia College of Art and Design (NSCAD) University in Halifax has been a bit of a hotbed of sculptural activity, orbiting the aesthetic of 1:1 scale. Thierry Delva (now longsince moved on from Halifax) numbers amongst its more prominent practitioners, which also includes the likes of Ontario-based sculptor Greg Forrest and, more currently, Zeke Moores, who obtained his BFA from the university in 2001 before moving on for postgraduate work at the University of Windsor, where he now teaches.

His work, much like that of his contemporaries and predecessors (excepting Forrest, much of whose work has been based on iconic sources, like the Stanley Cup or the late Keith Moon’s drum kit) takes its source in the trivial and mundane things of the world, in the discardable stuff of everyday life, in the unremarkable and overlooked—in short, in all that we take for granted and don’t give a lot of thought to. Delva, for instance, famously made a precise 1:1 scale sculpture of a very ordinary, nondescript Styrofoam cooler—carved from a solid block of marble.

The point behind all of this is, of course, to transform a banal and ordinary thing into something aesthetically extraordinary, and the way that’s done is to undertake the sculptural equivalent of putting a frame around it. By exactly repeating and replicating the dimensions and appearance of ordinary things in an extraordinary medium, that thing is, for all intents and purposes, framed and so given a new context that establishes an aesthetic discrepancy between the mundane original and unique copy.

Moores, like Greg Forrest, has shown a preference for cast metals like bronze and aluminum for much of the work comprising this exhibition. Unlike Forrest, however, Moores follows a more well-worn path of focusing on banal, albeit utile, things—like the ubiquitous case of beer. Beer Boxes (2012) comprises three elements, all formally identical, that exactly replicate three unremarkable commercially manufactured cardboard containers, bent, torn, and battered from everyday use. The originals are, of course, discardable, disposable things, meant, at best, to be dropped into the recycling bin but which it isn’t at all unusual to find adrift, littering streets and alleys.

So Moores has recast these things as bronze artefacts, as unique, handmade one-of-a-kinds, scrupulously replicating the source originals right down to the exactitude of their minor creases, bends, and tears. It’s a breathtaking achievement; the level of detail captured is absolutely extraordinary. Moores exacts an absolute fidelity to the formal truths of prosaic things we pay little heed to, making extraordinary lumps and bumps acquired by disposable, otherwise uninteresting artefacts during their briefly utile place in our world.

It’s like that with Construction Grade (2010), another triptych, done in cast aluminum. They lean against the gallery wall, all in a row, three large, flat panels all dimensionally identical. Save for medium, they are all in essence sheets of construction-grade plywood, utilitarian stuff not intended for the showier surfaces of built things but rather meant for supporting roles. Moores has, of course, cast them to exactly reproduce the coarse veneer of a cheap building material, the splits where its cheaply glued laminates are beginning to come apart, and the shallow holes left behind by knots that have fallen out.

More significantly, Moores has reproduced the marks – the signifiers, if you will – of use: the long linear scars of something having cut into and along the plywood surface, and the matching indentations that deface all the panels from one side to the other (all corresponding as the lined up panels lean against the wall), speaking of the stillness of weight that sat upon them undisturbed, compressing the wood beneath, for an extended period of time.

Bronze Barrier (2012), the only piece Moores exhibited here that is titled after its medium, also speaks of a form of artefactual time. He calls the piece a “barrier,” and it indeed looks exactly like one: a long horizontal wooden beam held in place by A-frame wooden supports at either end. But it also looks exactly like a common saw-horse used for building and construction to temporarily support stuff like wood that needs to be cut. Moores 1:1 reproduction includes the original’s “history,” the scars of use that include run-of-themill nicks and dings, as well as entire gouges dug deep into the surface. The original was/is, of course, not a precious thing, whereas Bronze Barrier (courtesy of its title alone) most certainly is. It’s purely an aesthetic object intended purely for aesthetic contemplation.

Finally there is Port-O-Potty (2011), the work here that cleaves the closest to its utile model. The title, of course, says it all: it’s a portable bathroom, a variation on the kind ubiquitous on construction sites or virtually any outdoor public event like a concert. The original is a massproduced object typically made of durable plastic or fiberglass, but Moores has done it in elegant nickelplated steel riding on a pair of cast aluminum skids that would’ve been originally wood. It’s the souped-up version of a temporary lav, a shiny, gleaming port-a-john on aesthetic steroids. And yet, despite its fancy, gussied-up appearance, it actually still speaks of the same utile role as its low-rent plastic cousin. It’s a constructed thing with nuts and bolts holding it all together lending it a manufactured quality, and so is less overtly an aesthetically created artefact than Moores cast metal sculptures. It’s actually possible to imagine using this thing for the purpose the original was intended. Such meaning holds, and doesn’t give way to the aesthetic imperative of the purely sculptural, as it does with all the other work here (the flaps on Moores’ beer boxes, for example, are rigid and un-manipulable, unable to be folded and tucked over one another).

So, in the end what are we to make of all this finicky exactness and absolute reproductive fidelity to the mundane lives of real artefacts? At one level there is, of course, the cognition of the skill and dedication it takes to achieve such 1:1 scale faithfulness. But there must be more, here, than mere acknowledgment that Moores is exceptionally good at making something that looks exactly like something else. And yes, there is. This is work that speaks to the contexts we place upon things and events, to the way we try to order and structure the world about us, and to the priorities and roles we assign to the artefacts we take along with us for the proverbial ride. Moores sculptural aesthetic would seem to have everything to do with the world of extraordinarily ordinary things.

All very well and fine, but when it comes right down to it, we’re wading in the shallow end of the aesthetic pool, in a spot where the deep, dangerous richness of scarier metaphors and meanings is, alas, unavailable and perhaps even unattainable. What meaningful depth can there be to sculpture that so acutely focuses on a narrow commitment to absolute reproductive fidelity to the exclusion of all else? Moores beer boxes, plywood sheets, barricade, and portable toilet are so insistently about the superficial, surface appearances of things that they are voided of the possibilities of otherness that might engage larger, complex, meaningful issues outside of themselves.

With Zeke Moores recent sculpture, we’re proffered a world of shiny objects glimmering enticingly in the light and drawing us to them, objects that are visually breathtaking and bedazzling but which, in the end, don’t seem to have a whole lot to say about anything.

Gil McElroy is a poet, critic, and independent curator living in Colborne, Ontario.