Steve Giasson is a conceptual artist who uses a wide variety of forms and mediums (writing, performance, installation, video, photography…) in order to question boundaries and defy genres. For Giasson, romantic notions of authenticity and originality are put at risk in a politically engaged practice that borrows freely from daily life and art history—through tribute and insult—in an effort to demystify the creative process and the figure of the artist.

His work has been presented in nine countries, from Europe to North America, notably at large international exhibitions such as the Liverpool Biennial 2012, the ED RUSCHA BOOKS & Co. at the Museum Brandhorst (Munich), 2013 and at the Gagosian Gallery (New York City, Paris and Beverly Hills), 2013-16. For his installation VOX, Steve Giasson received the Prix de la vitrine culturelle for emerging artists and a Mention from Cirque du Soleil, presented by Art Souterrain in 2015. He lives and work in Montréal.

Performances invisible, created in collaboration with DARE-DARE (Montréal), is his third solo exhibition. It gathers 130 minimal performances based on conceptual statements, carried out over one year––from July 7, 2015 to July 7, 2016––and now available on their website. The Performance invisible no. 20 (imaginer une pièce vide) is part of this project. To create this piece, Steve Giasson—in dialogue with certain works of Slovak artist Roman Ondák—asked his friend and collaborator Daniel Roy to imagine and draw an empty room to which Giasson added his full-length portrait. This work thus evokes several outstanding art exhibitions of emptiness from the 20th and 21st century, in their radicalness and asceticism, those of Yves Klein, Robert Barry, Michael Asher, Maria Eichhorn and so on, and presents an even more minimal experience: that of “devising an empty room”… The drawing is a limited edition for ESPACE art actuel, no. 115, and could serve as a sort of impetus for this kind of thought. 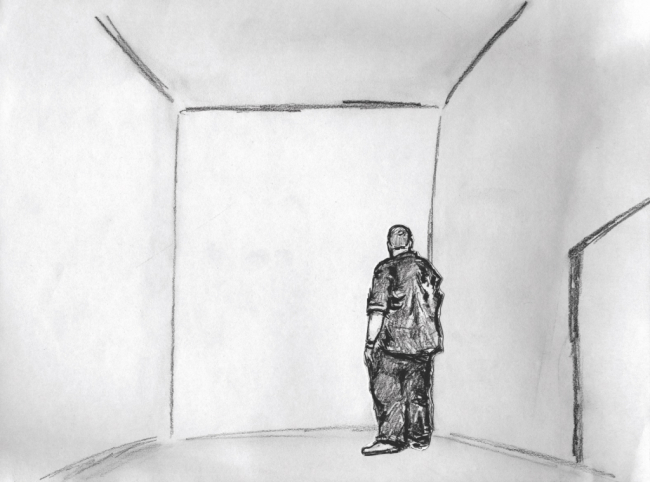