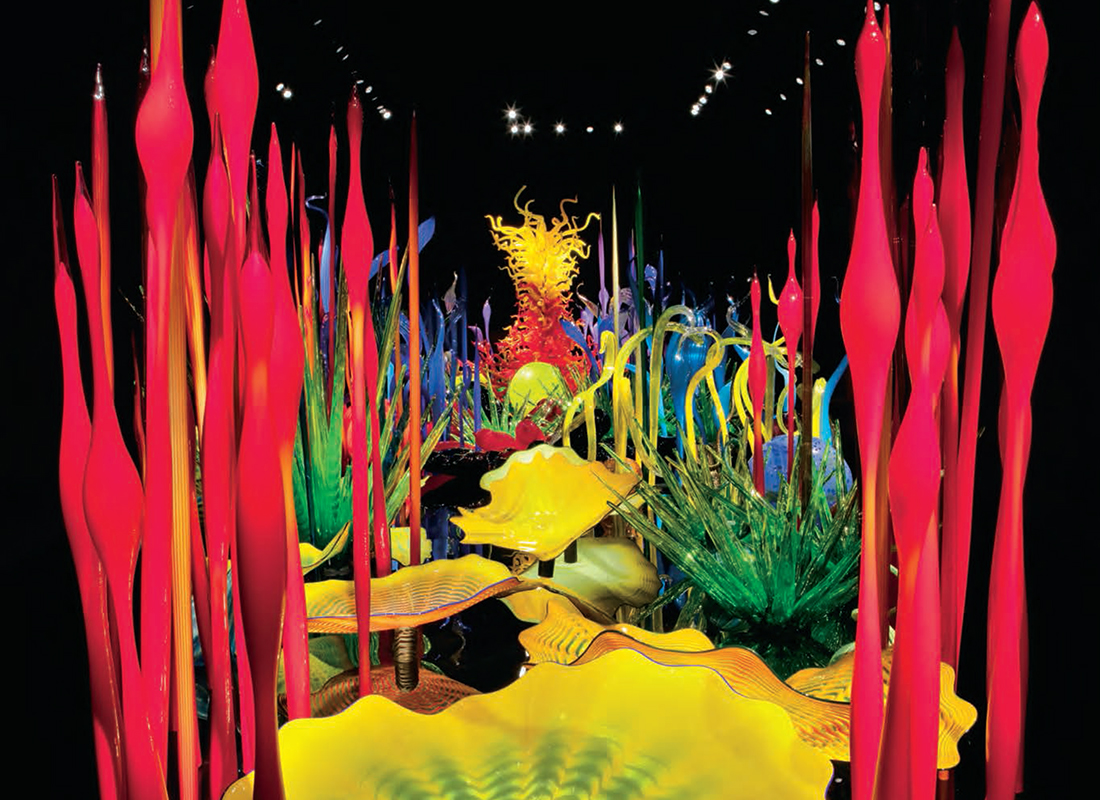 Of the objects which are being carried in like manner,
they would only see the shadows. To them, the truth would
be literally nothing but the shadows of the images.1
—Plato, Allegory of the Cave

After having been welcomed by The Sun, a flamboyant work installed on the steps to the Hornstein Pavilion on Sherbrooke Street, visitors entering the Montreal Museum of Fine Arts are led into Dale Chihuly’s fabulous world in which imposing glass sculptures, some translucent others opaque, project luminous shadows onto the walls, floor and ceiling. Shadows that make a mockery of the dark mirages of Plato’s cave and the gloomy chiaroscuros that ensued throughout art history. As bright and captivating as the structures themselves, they are an integral part of the unusual architectonic space in which mirroring objects and images converse in an exhilarating echo.

On both sides of the mirror, light and colour do their work, and one can only be delighted by the exuberant multi-coloured reflections. Even the gigantic semi-transparent orange flowers, mounted on a white grid on both sides of the Hornstein Pavilion’s majestic staircase, are nothing but joyous shadows of themselves, just like their twins that are piled up above the false ceiling of an alcove that they endow with an atmosphere reminiscent of the sumptuous Persian divans of the Thousand and One Nights. Thanks to a refined lighting design in each room, it is precisely this reciprocal reverberation of the material and immaterial that transports the visitor into a playful elsewhere inhabited by bizarre floral and aquatic outgrowths, like in a wonderful fairy tale. DAZZLING.

Though the epithets: fascinating, majestic, bewitching and breathtaking fittingly describe the exhibition, its stupefying effect also has a reverse side, for one must necessarily recover one’s senses, and the emotional decompression runs the risk of being of an intensity that is proportional to the initial shock. Curiously, it sometimes generates a release that is not so much focused on the installations as such, but rather on the illusionist who is responsible for this overabundance. By way of proof: the many criticisms addressed to Chihuly, or perhaps more aptly the “character” Chihuly, are just as extravagant as his creations. He is criticized for indulging in grandstanding gestures, of being but a bystander in the manufacturing of his works,2 to be protecting his commercial empire through self-promotional strategies worthy of the toughest of corporate C.E.O.s,3 to be turning his philanthropic activities to his advantage,4 and to be undertaking a dubious advertising campaign of his exhibition’s spin-off products under the label of Chihuly Inc.5 To conclude: Chihuly would therefore be nothing more than a formidable businessman rather than a “legitimate artist.” 6

All these accusations, which reintroduce the romantic myth of the authentic artist who is supposed to flourish in misery, are finally quite inconsequent in comparison with the severe judgment passed on his work. For example, in 2011, the recipient of the prestigious Pulitzer Prize for art history criticism in the US, Sebastian Smee,7 who by the way takes little interest in Chihuly’s notorious reputation, used very harsh words in regard to his work: “no concept,” “lack of depth and restraint,” and worse yet “tasteless.” One may just as well add: kitsch, eye-popping and bling-bling. That is to say that the overabundance of forms and colours is more of an affront than a source of seduction. Yet, and Smee acknowledges this, “taste” is a matter of variable reception codes based on a priori  judgments on various levels. Though I cannot here venture to address the broader question of how attitudes change over time, suffice it to say that after decades of celebrating the “spectacular,” it has perhaps reached a saturation point.8

The other side of the mirror

Despite the media fuss, whether negative or celebratory, Chihuly’s creations certainly express his passion for architecture, design, botany and the art of glass, which he explores to its fullest extent by offsetting the fragility of the large-scale pieces with barely visible metallic structural supports. Above all, he takes advantage of his proclivity for reflected light, sometimes partially filtered by the material, and it is not surprising that he makes his installations in brightly lit greenhouses, outdoor gardens where organic forms flourish like evanescent hybrid bouquets or in historically rich sites, among others Venice and Jerusalem, where they are rearranged into trans-temporal and trans-cultural crossroads, and where the shimmering and voluptuous glassworks are more likely to revitalize than contradict the timeworn architecture for the time of their exhibition.

Though they seem to appear as by magic in places where one does not expect them, the sculptures, many of which are reused, reproduced or slightly modified from one exhibition to another, are invariably arranged on site according to a set-design adapted to their host venue. “I’m as much interested,” the artist states “in the way my works function in a public space as in the works themselves.” 9 This terse statement should be enough to convince even the most doubtful that the works are based on an acute awareness of their lay out, even their breathing in space, and on careful consideration of visitors’ viewpoints and potential movements through the space. This is without a doubt an art that is essentially environmental. This being said, one can ask if these mainly monumental works benefit from being confined in closed spaces, such as museums or galleries, where they are likely to loom as invasive masses, whereas they take on the air of magical sparks when they appear in open spaces.

Whatever the case may be, the true magic begins in the foundry at the moment when the material is transmuted from solid to viscous and once again into a solid, in passing successively through very intense heat to the ambient warmth, which vitrifies it. It is worth watching Chihuly10 drawing, selecting the coloured glass bars, bustling about the ovens, shouting, gesticulating, directing the glassblowers and moving at a frantic pace to twist and model the bubbles. These are stretched due to centrifugal force and gravity, then reheated several times for a few seconds to avoid cooling down too quickly, and then finally seized at the right moment for the alchemist to pinch their desired form. Chihuly, in no way a “bystander,” is without a doubt the composer, choreographer and conductor of his Magnum Opus.

Shadows once again. This time, ours. Absent, even prohibited. Bathed in shadowy light, the visitors, trying as they may to approach and lean over the simulated dark black bodies of water (Chandeliers, Mille Fiori, The Boats, Glass Forest), will see only a very diffuse almost transparent reflection of themselves; an uncomfortable dizziness intensifying the impression of “rejection,” while the other works quite simply prevent a mirroring gaze of oneself. Though it is possibly destabilizing, the exclusion of the viewer is not negative, neither for him or her, nor for the works magnified through the carefully calculated artificial lighting that blocks any intrusive reflection. It must be noted that seen from this point of view, they “gain” by being confined.

Leonardo stated, “…shadow is a more powerful agent than light, for it can impede and entirely deprive bodies of their light, while light can never entirely expel shadow from a body, that is from an opaque body.”11 In other words, in normal lighting conditions shadow is opaque, persistent and absorbent, and consequently a likely source of anxiety, hence the popular expression “To be afraid of one’s own shadow.” Chihuly’s creations seem in fact to arise from a parallel world where natural laws no longer hold, a supernatural world where one thing and its double— inseparable and sometimes merged without distortion— appear to be lighting each other, like the prodigious stellar emissaries that generate their own energy.

If these outlandish representations are a source of dreams in the bucolic sites where they harmoniously interact with their environment, permanently or provisionally placed indoors, their obscuring power resides precisely in that they dislodge the unstable and worrisome reflections of reality in favour of their striking, constant and for this reason, reassuring doubling. To the extent that their confinement amplifies their apparent self-sufficiency in the museum “cave,” they are even more suitably placed to mirror the possibility of an ideal world that is unencumbered, crystalline and bright in the full sense of the term. Moreover, this ideal world is already taking shape here and now, particularly in The Boats  that, like cosmic voyagers traversing the milky way, delicately carry and disseminate planets and material satellites hailing from a universe where colour and light strike us not once but twice, coming across as the true progenitors of a constantly evolving epiphany. Truly, DAZZLING.

Nycole Paquin, holds a Ph.D. in semiology and has teached in the art history department at UQAM. She has published many theoretical texts and articles in specialized journals, her approach being informed by cognitive science and visual anthropology