Restoration of a Remarkable Corpus by Sculptor Pierre-Noël Levasseur 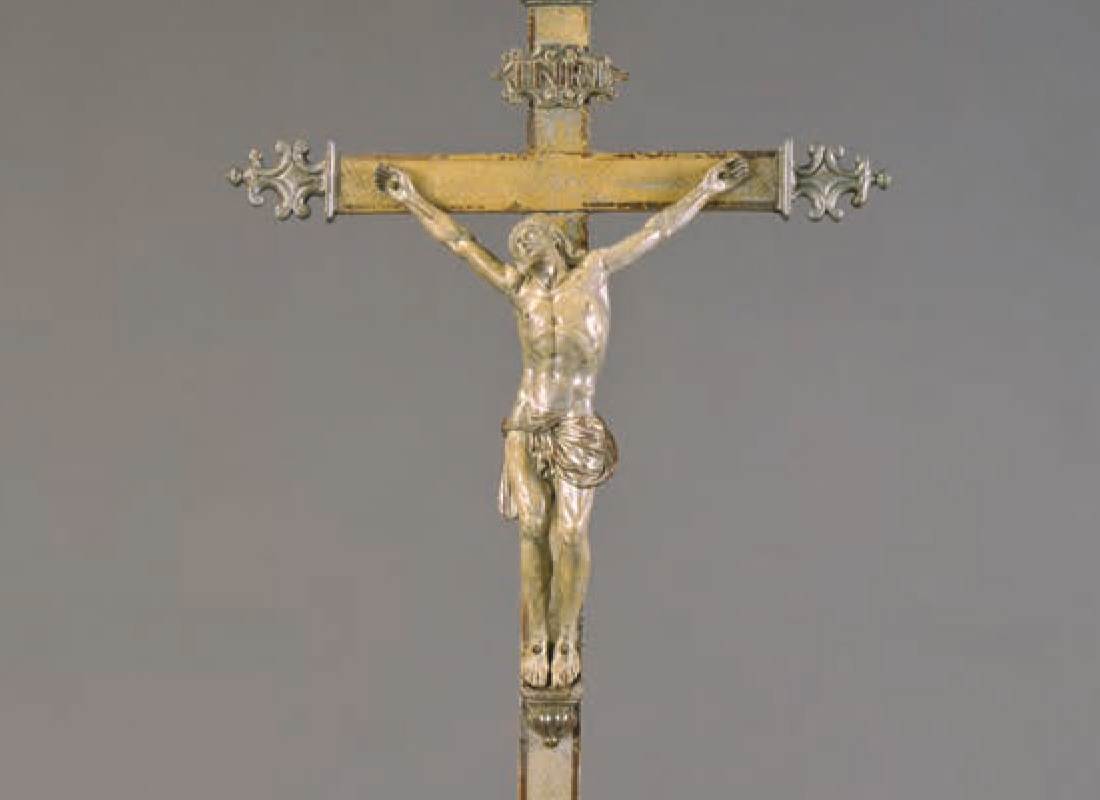 Considered one of the most illustrious figures of 18th century Quebec sculpture, Pierre-Noël Levasseur (1690-1770) was born in Quebec City and was raised among a dynasty of sculptors. Without a doubt the greatest ornamentalist and sculptor in New France, he created, among others, the decor for the interior of the Ursuline Chapel in Quebec City (1726-1736) and the two life-size statues of Saint Peter and Saint Paul at the Charlesbourg church (1741). Though effective in large-scale projects, he also expressed his talent in small-scale sculpture such as reliquaries, statuettes,1 as well as altar ornaments.2

The Christ on the cross, which was recently restored at the Centre de conservation du Québec, is part of an altar ornament. It would have been delivered to the Saint-Famille de Boucherville parish, probably in the 1720s, at a time when Levasseur was decorating the church’s interior with a four-column baldachin erected above the high altar. The crucifix was given to the nuns of the Congrégation de Notre-Dame circa 1960. It can now be admired at the Maison Saint-Gabriel in Montreal.

Altar ornaments were generally sculpted in wood and then silver gilded, that is covered with silver leaf using a rather complex technique to imitate the metal of silver crafted pieces. As well as being artworks, they presented sculptors with technical challenges and interesting prospects. Despite the small size of the crucifix, Pierre-Noël Levasseur really surpassed himself with this piece. Take note of the intensity of Christ’s face turned towards the sky, the movement of the body and the perizonium, not to speak of the anatomic realism, from the hair locks to the toes. To properly appreciate the meticulousness of this work, one must keep in mind that, upon completion of the sculpture, the wood was covered with a preliminary layer before the application of the silver leaf, a process that necessarily enveloped the forms and somewhat attenuated the fine details. The silvering itself, which was traditionally practiced by cloistered nuns, required precision and patience. In short, a small sculpture, but a great work. Returning to the details, consider the extremities of the crucifix’s shaft and crosspiece, the grape and wheat decorations (symbols of the Eucharist), for example. Another crucifix, created for the Neuville church in 1725, now exhibited at the Musée national des beaux-arts du Québec, makes it possible to imagine the elegant tripod base that originally supported the Christ on the cross.

The sculpture workshop, set up within the Centre de conservation du Québec more than 25 years ago, specializes, among other things, in the restoration of early Quebec sculpture. Statues, reliefs, tabernacles, altars and other decorative objects of wood, which come from churches and above all from museum collections, have been given a new permanence  and authenticity that deliberate modifications had assailed. The restorers worked on several of Pierre-Noël Levasseur’s works. The four-year restoration project they carried out at the Ursulines de Québec was a formative experience, and revealing in many ways about the techniques and methods used by this great 18th century artist.3

Claude Payer is a restorer of sculpture at the Centre de conservation du Québec, specializing in early Quebec art. Since 1985, he has overseen several restoration sites, such as the décor for interior of the Ursuline Chapel in Québec City and, recently, the high altar of Sainte-Famille of Boucherville church.