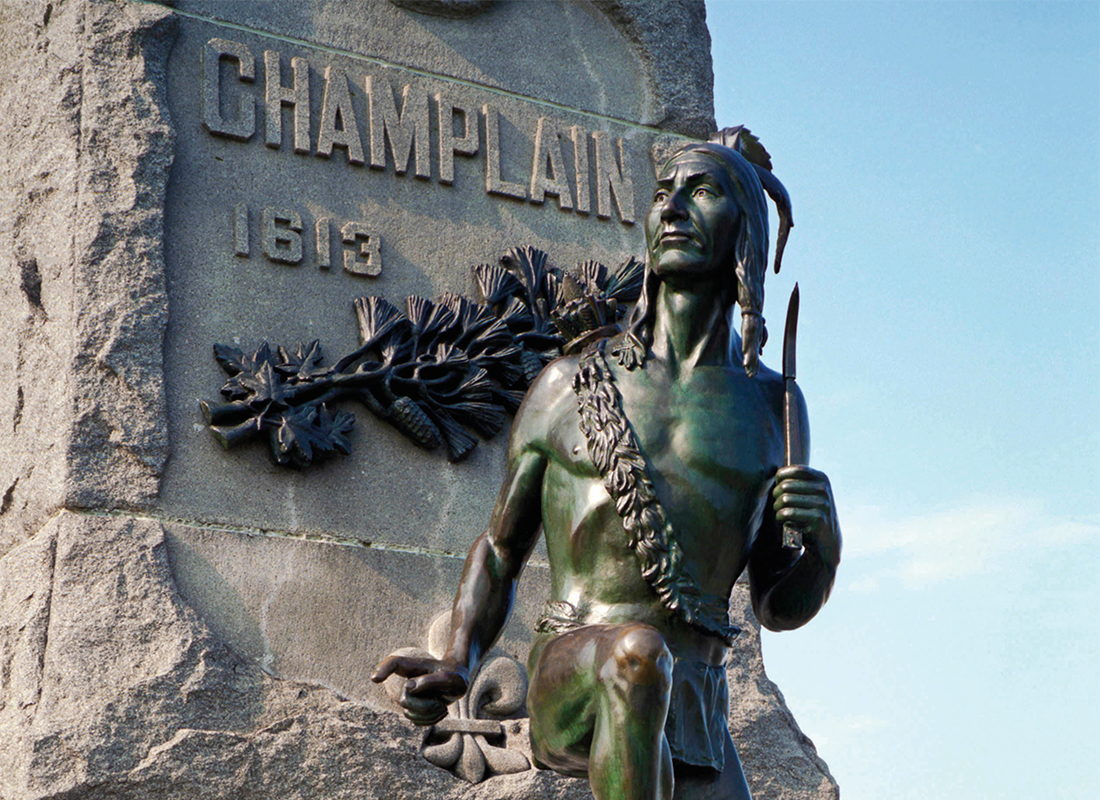 In December 2012, Jessica Gordon, Sylvia McAdam, Sheelah McLean and Nina Wilson launched the Idle No More movement in Saskatoon to oppose Bill C-45 proposed by the Harper government. This omnibus bill, which became famous in the wake of the events, contains clauses that not only threatens some important rights and treaties signed between Canada and the First Nations, but also endangers the preservation of protected ecological zones. One of the most significant impacts of the Idle No More movement is to have given a new impetus to native demands throughout the whole country, notably in Quebec, where the question of educational reform at the high-school level has become a political issue.1 More concretely, in 2013, the Quebec Native Women’s Association relaunched the call to give a more prominent place to First Nations history in the history curriculum.2 The Eurocentric-charged content of the high-school history program is in fact quite surprising when one considers the major “forgotten” events that punctuate it, such as the forced enrolment of aboriginal children in residential schools over several generations, or the various colonial and territorial repression strategies. These historical gaps directly impact our perception of the First Nations. In other words, the historical narrative – in which generally advocated linear and chronological form itself is open to debate – is a powerful socio-cultural and political tool, which can shape our perception of a particular phenomenon or group.

However, history is not only taught in schools. Public space is a heuristic field in many regards, and commemorative monuments play a significant role in the way history is transmitted. Well aware of the discursive force and function of these monuments that often represent historical figures, the native artist Jeff Thomas has made them the focus of his research. Originally from Buffalo, Thomas is of Iroquois/Onondaga descent and now lives in Ottawa. Like many aboriginal artists, he wears many hats, working at once as an artist, curator and researcher specializing in cultural theories. His photographic work explores the figures of Indian-ness, as well as the realities of Aboriginals in urban settings (urban natives). This interest for urban natives is rooted in a questioning of identity and personal history. Growing up in an urban environment, Thomas witnessed how his family confronted the many obstacles of the urban structure: “At times, the dual identities felt incongruous – Indians were supposed to stop being Indian in the city.”3 Seeking to close the gap that separated the reality of aboriginal communities from the representation of First Nations people in museums or in archival collections, the artist critically examines a biased form of history writing, which tends to reflect the fantasies of non-natives.4 This open breach between a falsified past and misunderstood present endows his practice with a pedagogical and anthropological dimension. In a way, it is about connecting collective memory with the reality of First Nations people by bringing the very causes of such a representational fracture to light.

Among the various figures of the urban territory, monuments make it possible to follow the ideological thread of the decision-making institutions that built them. Jeff Thomas is interested in two coextensive and almost recurrent characteristics of these commemorative monuments: on one hand, the absence of Aboriginals in the representation of historical events in which they were involved, and on the other, the discursive treatment that is made evident in the depiction of Aboriginals, when they are the subject of a representation. His work with the Monument to Champlain, located at Nepean Point in Ottawa, is emblematic of this critical reflection. Created in 1915 by Hamilton MacCarthy, the monument initially depicted only Samuel de Champlain, standing and holding his famous astrolabe. Three years later, a kneeling Anishinabe figure was added to the pedestal’s lower level. Intended to represent the First Nations’ assistance to Champlain in his explorations of uncharted territory, the statue at first was supposed to be this figure kneeling in a canoe. However, the group of citizens who commissioned the work did not have the necessary funds to pay for the canoe. Thus, this anonymous figure was left in a twofold position of submission, kneeling and clearly situated beneath the colonial figure. In 1992, during the commemorations of the 500th anniversary of Columbus’ “discovery of America,” Thomas, who had spent ten years making portraits of his son Bear in various urban contexts, began to focus on this particular monument. He insistently photographed his son in front of the Anishinabe sculpture, taking great care to place the figure of Champlain off-camera. In addition to drawing attention to this secondary statue with its clearly defined role, the series highlights the contrast between the stereotypical, semi-naked Aboriginal figure and the contemporary Aboriginal in an urban environment.

In 1996, this same monument became the target of the Assembly of First Nations who challenged the insulting character of the representation, not to speak of its historically incoherent costume. As a protest, the Anishinabe statue was covered with a blanket. While the assembly called for the disappearance of this part of the monument, Jeff Thomas found that this would lead to yet another omission of native people in the narrative of commemorative monuments. Instead, he suggested that a plaque be placed on the site itself. This plaque was to communicate the First Nations’ reaction to this stereotypical depiction, which only relates the role of Aboriginals in terms of servitude. History was to decide otherwise. In 1999, following a debate that was widely covered in the media, the National Capital Commission decided that the statue, nicknamed “the Indian scout,” should be moved to an adjacent park, Major’s Hill Park, where it can still be found today, in the background. Despite his disagreement, Thomas continued to photograph the statue, as is evident in the work Why do the Indians Always Have to Move (2001). This work shows the sculpture of the Anishinabe, his head turned as though looking towards the original Champlain Monument far off in the distance. The space left empty on the monument after the statue was moved also became a subject of interest to the artist, who used it for photographing staged scenes with his friends, notably the artist and curator Greg Hill kneeling in a canoe made out of cereal boxes, in direct reference to the monument’s initial project.5

The Exploit of Hochelaga

Montreal also has its narrative disgraces. Built in 1895, twenty years before the Champlain Monument, the Maisonneuve Monument was created by Louis-Philippe Hébert and is located in one of the city’s most frequently visited sites, Place d’Armes in Old Montreal. Beneath the victorious Maisonneuve, four historical figures stand out from the whole: Jeanne Mance (taking care of a child), Lambert Closse, Charles Lemoyne and… an Iroquois. This figure’s irritating anonymity is accompanied by an engraving directly on the monument pedestal, a quote by Maisonneuve stating: “Upon my honour I am bound to accomplish my mission; even if all of Montreal’s trees should transform into as many Iroquois.” In addition, between the historical figures, four bas-reliefs depict the signing of the charter to found Ville-Marie, the death of Dollard des Ormeaux, the first mass celebrated at Ville-Marie in 1642 and the Exploit of Place d’Armes. Jeff Thomas’ work Drive-by Shooting, Paul De Chomedey De Maissoneuve Monument, Killing an Iroquois Chief, March 1644 (2007), clearly describes what this “exploit”  of Place d’Armes is all about. The photographic work, which documents the bas-relief of the exploit and places it at the centre of the image, though it can be considered a secondary element of the monument, carries a strong conceptual charge that the title brings to the fore. Actually, even before the Champlain Monument became a subject of controversy in Ottawa, Thomas had focused on this Montreal monument, which faces Notre Dame Basilica. The minimalist documentary tone of The Iroquois, Place d’Armes, Montreal (1994) has the same critical force as the photograph of the bas-relief he created thirteen years later, which consists of underlining the historical silence to which First Nations are relegated in the history that commemorative monuments recount. In this case, the anonymity of the Iroquois chief, whose death is a colonialist exploit, appears even more forcefully due to the fact that all the Western historical figures next to him are identified with precision. Moreover, this raises the question regarding the identity of the Iroquois who completes the quartet. Is it really the chief who was killed or a simple representative of an entire nation whose land has been stolen? The history, at least the one the Monument to Maisonneuve tells, is mute on this.

In the summer of 2013, a group of artists in Ottawa, led among others by Howard Adler, were mobilized to put an end to the anonymity of the Anishinabe statue in Mayor’s Hill Park. Annie Smith St. Georges, an Algonquin Elder, was approached and asked to name the statue during a ceremony. Gichi Zibi Omaami Winini Anishinaabe, a traditional Algonquin name was chosen on that occasion. The group is currently negotiating with the National Capital Commission to ensure that a new plaque will finally identify this statue in a more honourable way. Let us hope that their request will be accepted and that this will clear the way for concrete changes in the way First Nations are represented in public space. The Iroquois of the Maisonneuve Monument deserves no less.

Aseman Sabet is a doctoral student in art history at Université de Montréal. Her research explores art criticism in the latter half of the 18th century and the role of touch in philosophical aesthetics. She is also a member of a research group studying the history of contemporary Aboriginal art in Quebec (Université de Montréal). In addition to her academic pursuits, Sabet is curator of Montreal’s Aires Libres, an annual event in celebration of public art, and regularly collaborates with various specialized publications.