Carrying on the legacy of both Pop Art and Russian Constructivism traditions, Cozic, a duo composed of Monic Brassard and Yvon Cozic, abandon so-called “noble” materials in favour of those regularly found in consumer society, creating works that are often tinged with a popular and humorous connotation. They adopted the name “Cozic” in the late 1960s in an attempt to redefine the artist in society. In 1971, the pair founded and managed the Société Protectrice du Noble Végétal, a farcical organization that oversaw several land art interventions such as Corde à linge (1971), Chaperons rouges – vêtir ceux qui sont nus (1971, 1990) and Néo-nymphéas during the 2001 exhibition Artefact Montréal – Urban Sculptures along the Lachine Canal. Cozic is a prolific team, having held numerous solo and group exhibitions while also producing architecturally integrated and open-air works. Particularly noteworthy among solo exhibits are works such as Project Code Couronne, shown in various locations since 2009, Cozic/Moli, shown at the Fondation Guido Molinari (Montreal) from September 25, 2014 to January 25, 2015, and Un étonnant voyage, shown at the Maison de la culture de Longueuil from October 1 to December 22 of 2016. Recipient of numerous prizes and grants, including the prestigious Jean-Paul Riopelle career grant, Cozic is exhibited in the majority of major Canadian museums as well as in several corporate and private collections throughout Canada and Europe.

You can read an interview with Cozic in the “Interview” section (French only). 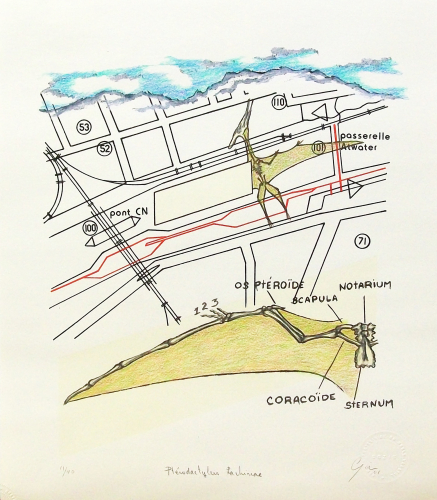