Megalomanias: Architecture, Urbanism and Their Fictions 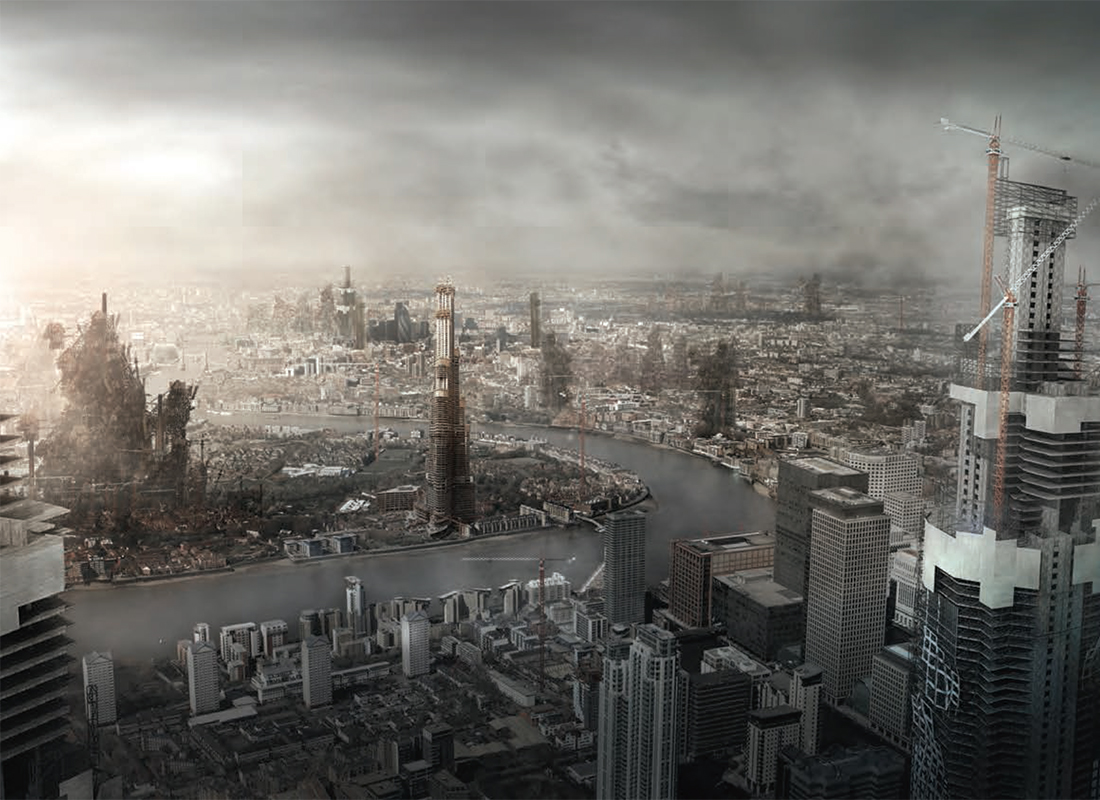 Since it was uploaded last summer Jonathan Gales’ short film Megalomania 1 has aroused fascination with its protagonists, a city and its architecture portrayed as an incommensurable and immobile construction site. A truly post-humanist product, Megalomania’s unfurling of Piranesian scenes allows one to grasp the failure of a certain form of contemporary architecture to serve the needs of the city in an era of sustainable development. Over the last decades urban planning, for a long time practiced on a human scale, has become the business of increasingly autocratic and ever less democratic town planners, who insist on constructing iconic buildings to satisfy the voracious appetite of an unbridled capitalism.

The history of architecture is marked by bigness: from the pyramids to the Palatine Hill dwellings; from the great wall of China to the Château of Versailles; from the universal exhibition palaces to the post-World War II housing blocks or corporate mega-towers. Though gigantism was for many centuries an expression of monumentality,2 it has represented, and still represents political and economic power, and massive population growth.3 It has, and still generates a utopia of mega-structures and artificial topography, such as Yona Friedman and Constant Anton  Nieuwenhuys 4 proposed more than fifty years ago; the symbolic and iconographic force of these concepts endures and to this day continues to transcend the imagination, taking shape materially in the discourse of globalization and virtually in digital architecture.

This architectural and urban bigness would thus be (in the light of Chomsky’s concepts) an antithetical representation of democracy.5 In fact, deconstructivist6 architecture, which figures in the forefront of the above cited short film, is reduced to the assemblage of a group of signifiers (its material forms far from the usual aesthetic compositions) that, by way of their contradictory relations, foster a readability of this complete and closed system’s lack of cohesion. Bigness, which for a long time was associated with a hegemonic representation in architecture, has its common denominator in the triumphant Herculean buildings that refute their context, or in an urbanism of exacerbated development in which intertwining elevated roads are nothing but a catachresis of mobility. Gales’ digital city evokes the concept of the sublime developed by the Enlightenment architect Louis-Étienne Boullée,7 for whom the architectural representation of the oversized had the power of rousing the imagination. Like Gales’ short film, Boullée’s drawings do not so much prophesize the future as they seek to transform the present: Megalomania effectively represents a dystopian and dehumanized future of the city and its architecture. Gales is unquestionably the product of his generation; if at first glimpse, his work appears to embody a virulent form of formalism that is subservient to technological determinism, his representation of the city is nevertheless an actual critique of the delirious rhythm of its current development, which is deeply devoid of any reflection regarding its sustainability. In this uchronia, architecture and the city are now fused, a Gesamtkunstwerk that personifies the dominant discourse and theories of the last decades, translating the irony represented by the desperate search for an iconic horizon that ends in a disappointing social, architectural and urbanistic ubiquity.

Gales work is a critique of the deconstructivist architectural theories that broke with architecture’s technical and figurative traditions, with history, society and context, to elevate its status through the development of a formal and critical scholarly discourse, intended to lead to a renewed autonomy of the practice. In the wide range of discourses, Gales evidently alludes to a text the Dutch architect Rem Koolhaas wrote in 1994, Bigness,8 which has its origins in a previous book (by the same author) Delirious New York.9

In 1974, upon reflecting on the architecture of excess, Koolhass posited that for a century, this revolution without program had been based on five theorems summed up as follows: “1. Beyond a certain critical mass, a building becomes a Big Building. Such a mass can no longer be controlled by a single architectural gesture, or even by any combination of architectural gestures; 2. The elevator—with its potential to establish mechanical rather than architectural connections — and its family of related inventions render null and void the classical repertoire of architecture; 3. …the distance between core and envelope increases to the point where the facade can no longer reveal what happens inside. The humanist expectation of ‘honesty’ is doomed: interior and exterior architectures become separate projects, one dealing with the instability of programmatic and iconographic needs, the other — agent of disinformation — offering the city the apparent stability of an object; 4. Through size alone, such buildings enter an amoral domain, beyond good and bad. Their impact is independent of their quality; 5. Together, all these breaks — with scale, with architectural composition, with tradition, with transparency, with ethics — imply the final, most radical break: Bigness is no longer part of any urban tissue. It exists; at most, it coexists. Its subtext is fuck context.”10

However, it must be underlined that for Koolhaas these theorems are not antagonistic to a competent architectural practice. According to him, bigness would transform architecture by slowing down its disappearance, which a certain faction of contemporary architecture announced:11 these theorems would in a certain way represent its survival. The architect and historian Jorge Oteros-Pailos believes that for Koolhass, they make up a certain expression of architectural autonomy, in the sense that the application of this type of project, which separates its users from the exterior world, also frees them from it. The building that competes with its context very likely makes it disappear, thus creating an alternative world that hovers above reality. Because it no longer needs the city (its self-sufficiency is generated by its program), according to Koolhaas the large-scale building is the ultimate solution to the problem of urban sprawl.12

Koolhass applied his reasoning to the headquarters of China Central Television (CCTV) in Beijing. This very large-scale building, designed by his firm, the Office for Metropolitan Architecture (OMA)13 and Ole Scheeren, was planned in 2002 and should be inaugurated this year. The CCTV has instantly become an iconic element in the Beijing cityscape. It is comprised of two unequal towers of about 50 stories, which are connected by a suspension bridge that holds another thirteen stories. Standing 234 meters, this mega-structure overlooks the city and concentrates all aspects of television in a single place (administration, production, broadcasting). According to the New York Times critic Nicolai Ouroussoff: “Mr. Koolhaas has created an eloquent architectural statement about China’s headlong race into the future and, more generally, life in the developed world at the beginning of the 21st century. It captures our era much as the great works of the early Modernists did theirs.” 14 For its part, OMA emphasizes this building’s ingenuity in regenerating the exhausted typology of the skyscraper in which height and critical mass erode creativity because the distribution of spaces are intended to translate the programming of its uses. Though it is true that the CCTV is in the image of China’s modernization, it is also true that a whiff of architecture’s deconstructivist concerns hangs about it: the distortion of a structural system, the dissolution of the human scale from the formal standpoint of the building, the collusion of unpredictable spaces and environments, a certain detachment from the building’s functional requirements and so on. Nevertheless, the fundamental aspect of this construction remains its material and immaterial monumentality, the key to which (as Ouroussoff has written) is to be found in the building’s private garden, which visitors can view from the public observatory.

It is a blow-up of Piranesi’s well-known Campo Marzio dell’Antica Roma engraving, an archaeological, holistic and imaginary reconstitution of ancient Rome. The exposition of this ideal speaks volumes on China’s projected development, which ultimately has turned out to be a purely formalist exercise that mirrors what has happened in most countries that have recently joined capitalist regimes. In his text Bigness, Koolhass wrote: “BIGNESS destroys, but it is also a new beginning. It can reassemble what it breaks.”15 It is hard to anticipate what this type of building will be able to generate in a society in which time has suddenly been compressed. If it does effectively reassemble architecture’s functionalist and formalist components, the social, relational and environmental, and those of the current architectural and urban discourse are left by the wayside. In this regard, the mega-structure and the ecumenopolis remain frozen in the architectural concept that gave birth to them in 1960. Their self-sufficiency, generated by the yoking of infrastructure (material production) and superstructure (ideological production), is part of a capitalist determinism, which clearly seems to be capitulating in the societies that brought it into being.

Alessandra Mariani is the editor of the journal Muséologies. Les cahiers d’études supérieures. She is a student in the art history department at Université du Québec à Montréal. In her doctoral research, she seeks to define the correlations of contemporary artistic and architectural theories and practices that underpin the transformation of architectural practice, notably that of Diller Scofidio + Renfro