Mark Lombardi’s Topographies of Power: The Work in the Map 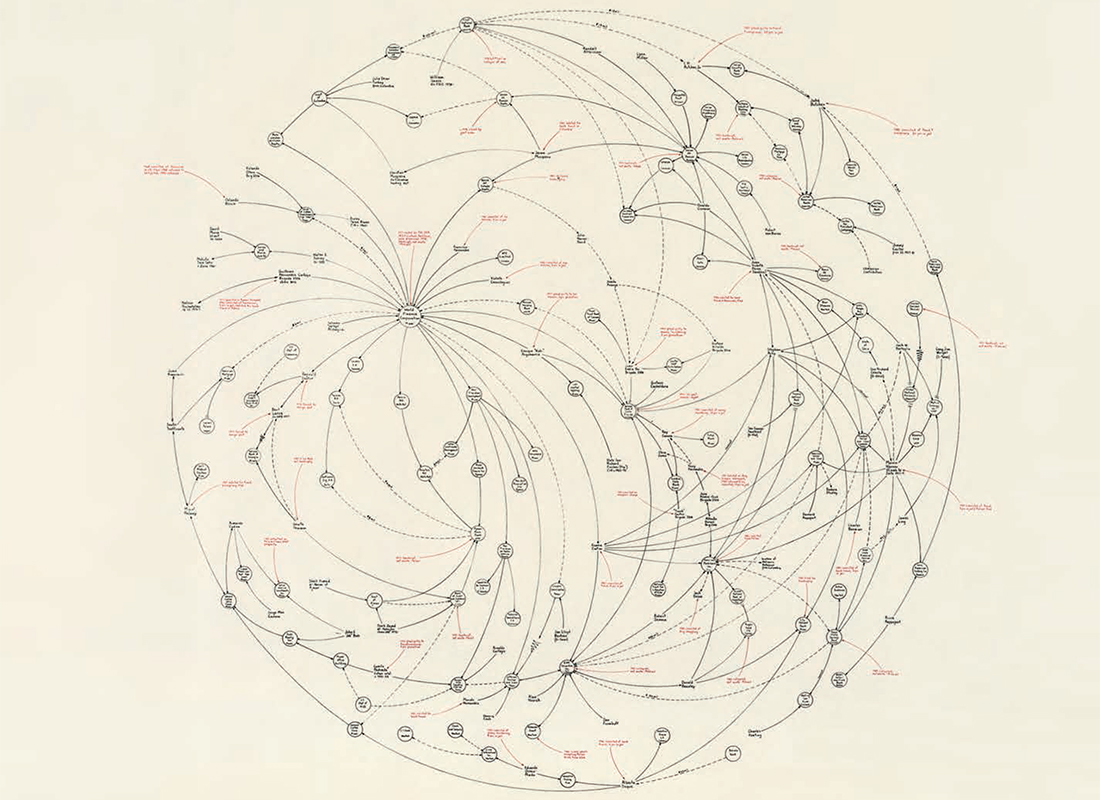 How does one create a space without end, without borders, not even a physical extension? Some maps do not represent geographical territories, and yet they help one find one’s way, navigating a system, visualizing possible itineraries and traffic flows. “I map the social and political territory in which I live,” is what Mark Lombardi (1951–2000) said about his series of diagrams that he began in 1994 in Huston, and which ended with his tragic death in New York.

Many artists as well as philosophers have claimed the position of cartographer, surveyor, explorer of visible and invisible dimensions. “I am a cartographer,” Michel Foucault declared in a 1975 interview. Writing has “to do with surveying, mapping, even realms that are yet to come,” Deleuze and Guattari stated in A thousand Plateaus.1 Inspired by the developments of conceptual art, Lombardi’s diagrams have often been described and interpreted in reference to these thinker-cartographers: Foucault, Deleuze and Guattari. While the geographical meaning of the word “map” designates the graphic representation of a territory on a support (globe, paper, canvas, atlas), its more abstract philosophical definition elicits a spontaneous connection with Lombardi’s work.

Lombardi’s diagrams are the result of the artist’s insatiable curiosity about government scandals. For years on end, first as a researcher at the Everson Museum and then as a sideline to his activities as a librarian in Houston, he meticulously documented the alliance networks between political and financial milieus on a global scale. His investigation led him to George Bush and Bill Clinton, as well as the closed circles of the Vatican, the mafia, drug and arms trafficking, terrorism and corruption. This research resulted in works that lay out the topography of a power system fuelled by financial transactions and shaken by court convictions, for a period ranging from 1930 to the 1990s.

One enters Lombardi’s work from any given point on the map. The interaction between political, economic and social forces takes the shape of a complex network. The eye is naturally drawn to certain convergence nodes from which a concentration of lines emanates. These arcs point to secondary clusters, which produce further links to form the ramifications of a system of interconnected points. The non-referential space inside which Lombardi locates these systems is relative, flexible and extendable.

In World Finance Corporation and Associates, ca. 1970-84: Miami, Ajman, and Bogota-Caracas (Brigada 2506; Cuban Anti-Castro Bay of Pigs Veteran) (7th version, 1999), the bank at the centre of the scandal is the main root of the network. This institution forms a central node of lines that converge and radiate outwards to form an almost perfect, but nevertheless, open circle. Gery Bull, Space Research Corporation and Armscor of Pretoria, South Africa, ca. 1972-80 (5th version, 1999) shows two symmetric nodes linked by an accumulation of semi-circular lines that face each other like a two-headed monster. In these two examples, the unity of the form is the result  of its contours, the perfect roundness of its curves and the immaculate white of the background (less a void than an elliptical environment). The elegant, delicate and harmonious pencil-drawn lines contrast with the murkiness of the corrupt manoeuvres they bring to light.

Some maps also incorporate a temporal dimension and their form consequently unfolds horizontally. The work Inner Sanctum: The Pope and His Bankers Michele Sindona and Roberto Calvi, ca. 1959-82 (5th version, 1998) depicts the tax evasion and covert financial dealings emanating from the Vatican Bank. Three chronological lines structure the form: the dates scattered along the axes serve as a mooring for a cluster of points dispersed on both sides. Structured around the frontlines, the form opens up and its contours become more porous as the scandal unfolds and widens. Within the stratification of the spatial and temporal dimensions, multiple centres of influence take form and project isolated stems outwards, like rhizomes spreading to invade new territory.

In distributing social interactions in space, Lombardi makes the relations that make up a section of the social field both visible and intelligible. The structures that he draws resemble sociograms: they mix the form of the network (representing the organization of the relations between a system’s elements) and that of a diagram (representing a system’s dynamic processes and historical evolution).

The formal language the artist adopted is both clear and opaque. Lombardi followed the classical cartographic tradition of establishing a legend of conventional signs that specify the nature of the individually represented elements and the relation between them: one- or two-headed arrows designate a one-way or two-way influence, the dotted lines represent money transfers, spirals indicate the resale of a company, and the colour red — breaking with the uniform tone of the drawings — signals legal actions, bankruptcy filings and lawsuits.

Despite this clinical precision, the map’s information resists interpretation. Unless one knows the context of the affair and the main players involved, it is difficult to grasp the tangled plot unfolding before our eyes. Even though it makes hidden manoeuvres visible, reveals scandals in an ordered, pared down and meticulously captioned structure, the work explains nothing. It does not open any clear reading path, and leaves viewers lost in its twists and turns. This play among the transparency of the method, the ethereal character of the form and the opacity of the meaning create a tension that establishes the conditions of the critique.

Lombardi’s structures are often described as rhizomes. In botany a rhizome is a network of underground stems. Deleuze and Guattari have given this term a philosophical meaning and associated it with the map, not as a graphic production, but in the abstract sense. They define the figure of the rhizome as the opposite of the hierarchical tree structure, with its primary trunk and secondary branches. On the contrary, the rhizome is a network of potentially infinite non-hierarchical “directions in motion” without beginning or end, or localizable positions; it is “nonsignifying,” “without an organizing memory” it “is becomings.” 1a It is not a tracing, a form of recording or reproducing the territory, it is the map itself, “it is entirely oriented toward an experimentation in contact with the real,” it “is open and connectable in all of its dimensions.” “It can be drawn on a wall, conceived of as a work of art, constructed as a political action or as a meditation,” 1b the authors write in A Thousand Plateaus. “Make maps, not photos or drawings,” 1c they exclaim.

But how does one make visible not only a territory but an abstract and always open, shifting, fluid map, which can only be produced not reproduced? In Lombardi’s drawings, the configuration of the network can be read as a “recording” of influence peddling and its ins and outs. It captures the flow of power inside the infinite capillarity of the rhizome. In crystallizing one of its potentialities, one of its actualized combinations, it presents a suspended state of connection. It archives the trace of micro-phenomena that were produced through rhizomatic effects. Operating like the organizing memory of rhizomatic effects, Lombardi’s networks differ from the rhizome in that they are the outcome of its archive.

The Map as an “Abstract Machine”

Lombardi uses the term diagram to describe his graphic production. “I am pillaging the corporate vocabulary of diagrams and charts … rearranging information in a visual format that’s interesting to me […]” he explains.2 As a concrete assemblage of geometric figures, the diagram is also inflected in the abstract sense: “What is the diagram?” Deleuze inquired, commenting on Foucault, “it is the map of relations between forces, a map of destiny or intensity, which proceeds by primarily non-localizable relations and at every moment passes through every point, or ‘rather in every relation from one point to another’.” 3 The diagram and the rhizome, both of which Deleuze describes as maps, have common points: they unfold as they are put in relation to, in coextension to the whole of the social field, in a non-localizable diffuse manner, without a fixed form, in a fluctuating virtuality. But they are not equivalent: Foucault’s diagram has a causal dimension; it is the immanent “abstract machine” that is constitutive of power and that generates force relations between individuals, technical objects, and organizations. Foucault’s diagram resides in the gaping void of formless space in which Lombardi’s localized diagrams take place; the former determines the visible configuration of the latter, all the while remaining invisible in the open expanse of the inbetween.

The Works in the Map

In an article on Lombardi and the “relational diagrams,” Jakub Zdebik attempts to demonstrate how Lombardi’s work “practically illustrates” the philosophical concept of the diagram: “the characteristics of the diagram as enumerated by Deleuze are also present in Lombardi’s work,” he writes. For example, he explains that Deleuze’s diagram is “defined by informal, abstracted functions and unformed matter,” and that by correlation, “Lombardi’s diagrams cannot be definitive because information is missing.” Further on he adds that the former “does not distinguish the content from the expression,” while in the latter “the vagueness of the curves signifying ‘influence’ play out on a material level — exchange of money — and on an aesthetic one — representation of the flow of power.” 4

Some of the parallels Jakub Zdebik draws seem obvious, others less so, but in the end is the play of correspondences not a pitfall? In trying too hard to compare the characteristics of the concept and those of the work, one could come to the inverse conclusion, namely that Lombardi’s diagrams do not illustrate the concept of the Deleuzian diagram. Actually, if Deleuze’s diagram is the “map of relations between forces,” these relations are almost entirely absent in Lombardi’s drawings. Of course legal power is indicated by red marks on the map, and it aims to (often in vain) stop shady activities, but what appears before our eyes is less the relations between forces than the relations of collusion between the powerful.

Another approach to viewing the relation between Lombardi’s diagrams (as a graphic production) and Deleuze and Foucault’s diagram (as a conceptual tool) consists in thinking of the work as being in the reality the concept describes: it does not represent the map, it is, phenomenologically, part of it, as an object that exists in the world. This world in which the work takes place is produced through relations of force (the diagram) and innervated by connectivity potential (the rhizome). The work contributes to producing the map in so far as it is part of the world (and not because it represents it).

Lombardi’s works (in fact, any work) activate zones of the rhizome, they are part of power and knowledge relations, they create new and unexpected connections outside of the work’s space. The drawing titled BCCI-ICIC & FAB 1972-91 (4th version, 1996-2000) is considered to be one of Lombardi’s most accomplished works. Within the sprawling network one can make out the names of former executives of the fraudulent bank, those of their associates, and that a former bank manager’s brother-inlaw: Osama bin Laden. Just a few weeks after the September 11, 2001 attacks on the World Trade Center, the Whitney Museum received an unusual request: an FBI agent would like to see the drawing. The interest the artwork aroused in the FBI, and its reconfiguration as a source of information in the “war on terror” are perhaps where the exemplarity of possible connections resides and the ability of the work to open new paths of circulation on the map.

Nathalie Casemajor Loustau is carrying out postdoctoral research in the Department of Art History & Communication Studies at McGill University. Her research concerns photographic memory, digital archives, the appropriation of urban space and the visualization of concepts in the social sciences. Over the last few years, she has worked as a coordinator, administrator and researcher for various citizen’s collectives, cultural organizations and academic projects. She also has taught at UQAM (École des médias, Department of Sociology) and at the Université Lille 3 (Department of Art and Culture).