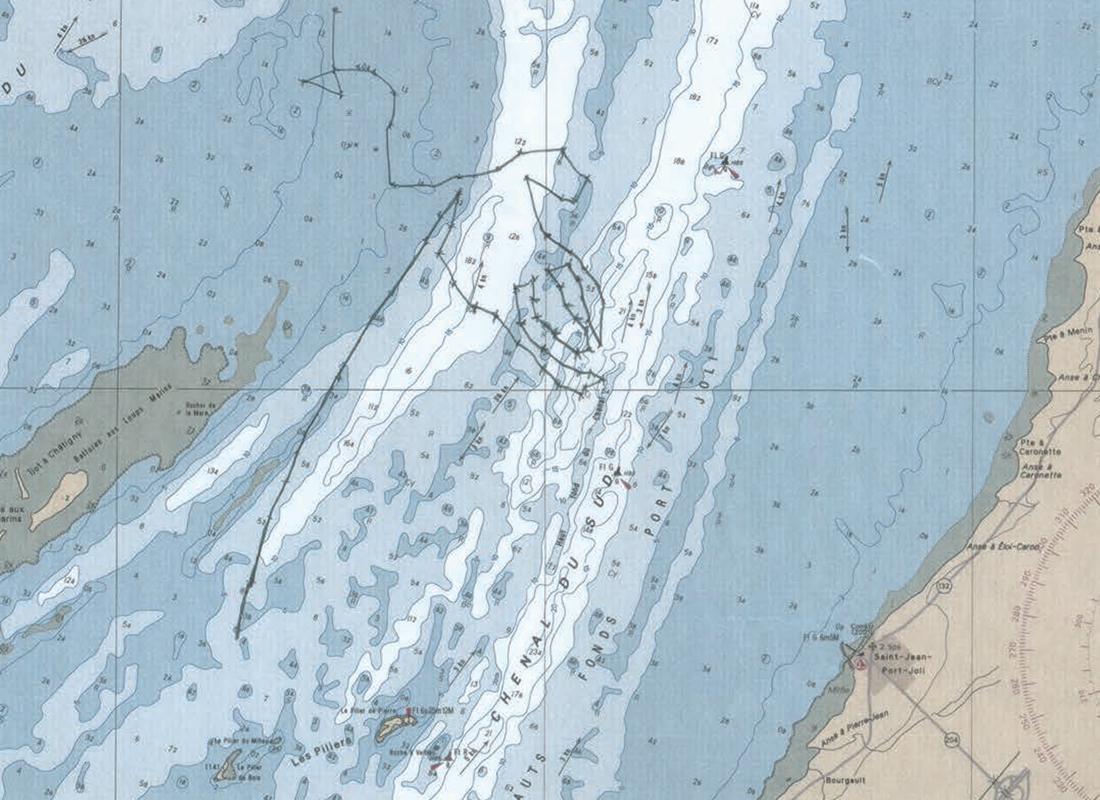 Sculpture creates the issue of where?
Responding to it before it is asked.1
—Michel Serres

If, for Emmanuel Kant, space is a form a priori of sensitivity, mapped space in this collection of essays refers rather to physical space, which concerns human experience. From this perspective, human beings are — one could say — naturally surveyors. They are inclined to calculate the space travelled and the time it has taken. On the other hand, as soon one began to produce images representing the first concepts of the world on flat surfaces, with some places inhabited and others not; as soon as one became a geographer more than a surveyor, sketching the world as one imagines it; or better, when calculating space, one resorted to geometry as a mathematical science, the mapped space is abstracted from the ground, it is removed from physical experience, that of the surrounding world, shifting towards a representation of what myth, legend can give as a vision of the world.

Certainly, lavishly drawn, decorated and embellished, most maps of the world from Antiquity and the Middle Ages are magnificent works to decipher. They are regarded as similar to paintings. Since the Renaissance, artists such as Leonardo da Vinci have make maps. Consequently, if the artistic relationship to this geographical space nearly always has to do with the painter’s craft, how does one think about mapped space in relation to sculpture?

In L’oeil cartographique de l’art, Christine Buci-Glucksmann shows that the history of the map in art is to be interpreted from the viewpoint of Icarus.2 This is a history of regarding the world as imagined from up in the sky. This cartographic eye with which she examines the work of artists such as Da Vinci, Brueghel, Vermeer and also Jasper Johns, Alechinsky, Debord and others, introduces new ways of viewing our relationship to the world. Some Quebec artists also share this vision of the map viewed from above. During the 1980s, Richard Purdy made maps that distorted this perspective. In L’Inversion du monde (1988), land becomes water and water becomes land. This transposition of land and sea surfaces leads to imagining a complex world in which continents can be reinvented. Elsewhere, this “geophysical” undertaking reminds us that even maps deemed official are the result of arbitrary decisions. For Eveline Boulva, the map also is subjected to distortion, but it is mainly from the perspective of landscape aesthetics that changes are carried out. With Chaise, which refers to the shores of the St Lawrence River, she links personal and scientific views of the mapped space. She associates places that she has explored with the objective image that topographical data presents.3 But the map as a space of inscriptions and support for art can also be completely transformed, as in the work of Suzanne Joos. By manipulating and spontaneously intervening on the map, Joos twists its usefulness as a way of finding one’s bearings in space. Through this recreation exercise, her maps become illegible, the result of a self-writing that occupies no precise place, except that of an imaginary land.

Thus, in disrupting the value of using maps, these various procedures participate in “geo-criticism.” 4 Moreover, for some artists, this reading tinged with a concern for presenting a different understanding of the map is not necessarily aimed at geographical territory. This is the case of artist Mark Lombardi’s drawings, some of which Nathalie Casemahor-Lusteau presents and analyses. In mapping various politico-economic networks together with money laundering, Lombardy created diagrams combining various players of global commerce corrupted by shady dealings. In this sense, the sinuous course of international transactions, which defies borders, and of course has moved away from geographical space, still leads the viewer to imagine the power of money at the level of global capitalism. Right away, Lombardi’s investigations imply a picture of a global world.5 Seen in this way, artists such as Doug Beube and Eduardo Abaroa can very well show us the image of a planet prone to possible politico-economic conflicts. On this subject, Beube’s Strike Anywhere makes this explicit in a world filled with matches ready to ignite.

Certainly, geography, especially when it covers the entire planet, can be of use more than ever when waging war, but the earth as a sphere also suggests displacement, movement. Rosalind Krauss, in her history of sculpture in the 20th century, emphasizes the importance of noting experiences of actual space that are meant to decentre the self, exteriorising one in front of a sculpted work.6 In these conditions, space initially is experienced as place, as belonging to a world lived in the present. Artists producing Land Art seemed to take this experience into account first. Although the thesis Buci-Glucksmann developed is about the cartographic eye, the author also mentions the importance for artists such as Morris, Oppenheim and Smithson of walking, of inevitable journeys and of the necessary nomadism before managing to create work about the ground. In venturing into landscapes often deserted or little inhabited, these artists would draw “geo-poetical” maps, formulating ephemeral sites.7 In his text, Gilles A. Tiberghien, author of a book on Land Art, also points out the exceptional contribution of these artists who took land, the ground as a space for mapping. And his text also proposes several other ways of grasping the inventive aspect of maps, which are so many occasions for putting aside cartographers’ claims of scientifically measuring the world.

Reviving the geometry of the ground next to the body is also a notion Nathalie Daniel-Risacher stresses in her contribution. She refers most notably to artist and sculptor Pierre-Alexandre Rémy who surveys actual territory in order to record multiple variations. His sculptures are like drawings in the shape of lines that unfold in physical space. They are also the product of what one could call a poetics of space. The relation established with the milieu is far from being conflictual. As an artist, his gesture is meant to be a reappropriation of place. In Antiquity, according to Michel Serres, statues often defined this ambient world, symbolically determining familiar space. These statues served to situate us in the space, to show us where we are.8 The world thus emerges as a limited space, in which I find myself at home. However, in a work entitled Atlas, Serres instead takes the measure of the immeasurable, of the incessant change within a world where old landmarks are vanishing.9 He is interested in cartography in the context of communication technology. With the instrumentation that new technologies display, enabling access to electronic globalisation, the relationship of space-time has changed and the question “where are you going?” has been replaced subtly with “where are you?”

Martin Champagne’s text analyses Réal Patry’s recent installation, regarding the idea of private property. In the era of globalization, even if some borders seem porous, others do not disappear.10 These boundaries then are the concern of Patry’s “topocritical” work. Without markers that can produce virtual spaces, certain borders are closed to inhospitable places. Faced with this phobia about security at any cost, the discourse itself becomes a barrier. On the other hand, in this context of an extended space, where there is a risk of being confined to a particular territory, it is desirable rather to be positioned facing technologies that quite obviously require a new alliance with living conditions while remaining, as Nietzsche proclaimed, “faithful to the land.” Several of David Renaud’s works, relating his response to new technologies of localization are discussed in Bénédicte Ramade’s contribution to this collection of essays. Faced with the dematerialisation of territory incurred by new technology, this artist endeavours to reproduce fragments of land to scale, which become landscapes presented as models of a site in the exhibition space. With these faithful reproductions, Renaud gives the viewer new cartographical experiences. Some of these recorded spaces are like rocks that rise up out of the sea, small islands springing up from nowhere that Renaud introduces into the field of sculpture as bodily experience.

The image of the island maintains a link between geographical and imaginary space. It symbolizes utopia, as François Chalifour emphasizes in his text. This utopian image from two of Jean-Yves Vigneau’s exhibitions is analysed here: the island seems to sway between “nostalgia and melancholy.” At first, the island is transformed into a tomb. Then Vigneau recalls that it could be like a statue, emerging from the water. But the island is also a place that suggests comings and goings, that consequently invites journeys, necessitates displacements. The sculptor cartographer then becomes a traveller. The journey becomes part of the creation process. Human beings are constantly on the go, on the way. Sculptor cartographers are those who can set an example. Like Vigneau, Pierre Bourgault is a good sailor. He has been sailing the St Lawrence and its islands for many years.11 Since the 1990s, he has made journeys on his boat that have resulted in drawings transposed onto maritime maps. Saint-Jean-Port-Joli belongs to this series of random journeys made by water. In the autumn of 2012, he presented an exhibition in Montreal titled Jenesaispasvraimentoujevaismaisjemenvais.12 The immense sculpture set up in the centre of the gallery is an aeolian capsule. This, of course, suggests the wind. On some maps of the world, one the painter Dürer signed, figures all around the map are shown representing the winds blowing on the earth. Winds are essential for those who want to sail. Without them, one cannot maintain one’s course, unless the art of navigation invites us to drift away instead.

Drifting is to be diverted from one’s course, to continue on one’s path towards the unknown, to unfamiliar places. This seems to me to be the perspective from which artist Christoph Fink carries out his work. To elaborate his project Atlas de mouvements, there is always a voyage beforehand. In my interview with him for this collection of essays, he recalls how his journey is carried out. Composed of a hundred and sixteen trips up until today, carried out in Europe, North America and the Middle East, his Atlas takes shape from visual and sound records, but also sculpture presented in the form of terracotta disks. In Flemish, as in Dutch and German, the word “movement” has the root “weg” that refers to a path. This path is what makes the bridge between man and his living conditions on land or sea. The paths that our artist travellers take are without a doubt far removed from the figure of a globetrotter and even more so from that of a tourist who criss-crosses the planet craving for exoticism. Closer to Victor Segalen’s aesthetics of diversity,13 their paths instead present mapped spaces open onto infinity. In other words: artists are, as Sloterdijk thinks, among those who keep us from sinking into routine.14

André-Louis Paré, a professor of philosophy at Cégep André-Laurendeau (Montréal), writes for various Quebec contemporary art magazines such as Espace, esse, Etc, Parachute… He is a member of the editorial committee of Esapce sculpture and since 1990, has supervised many special topic themes for the magazine. He has also written numerous texts for catalogues and pamphlets.