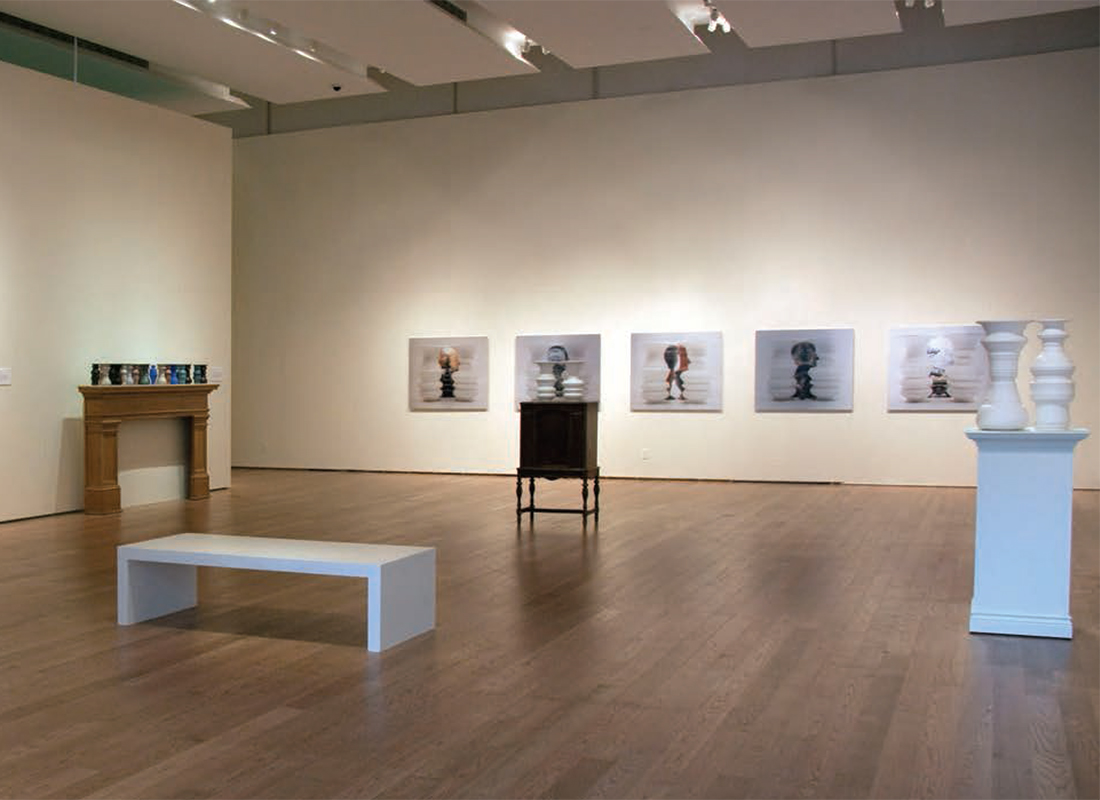 The exhibition Greg Payce: Illusions speaks about the body and the world, and the coexistence of space and objects. It occupies the entirety of the third-level galleries of The Raphael Yu Centre of Canadian Ceramics at the Gardiner Museum, and in dialogue with the historical collections, it makes significant appearances on two other floors. Primarily a manifestation of the Calgary-based ceramist’s ongoing relationship with the ceramics discourse, the thoughtful selection of works, spanning twenty years of practice, is also the result of his many conversations with guest curator Amy Gogarty.

Greg Payce: Illusions is the corollary of an artist expertly playing with his medium, his discipline, his/its history, while exploring the nature of sensory perception. Payce’s liaison with ceramics has spanned more than forty years and is still going strong. Greg Payce: Illusions amounts to a very convincing demonstration of the ability of ceramics to bring about significant embodied experiences. Payce’s main characters are ceramic vessels in an assortment of sizes. These vessels perform in various compositions and are staged in different ways. They appear in conjunction with appropriated or custom-built furniture or are remediated in astonishing lenticular photographs or videos. The play between media acts as a go-between, creating concepts and concrete phenomena through embodied sensoriality.

The exhibition presents a body of work too vast for a brief review. I have selected a few works displayed throughout the museum that are exemplary of the interplay between ceramic objects, objects of inquiry, spaces and bodies.

At ground level, Artifacts, Implements & Images from the artist studio 1991-2011, welcomes the visitor. Displayed in a large window box, the artist’s ‘vestiges of the years’ are organized in a composition reminiscent of his studio environment. The range of objects is impressive. Templates used to form his clay vessels, newspapers clips, postcards and diverse types of images, an assortment of measuring instruments, numerous sketchbooks and notebooks mingle successfully together. Jointly, they stand for the rich crosscurrents and ramifications that support the final result but are not always apparent. Furthermore they ensure that we locate the ceramist’s vision in its materiality, all the way through the works’ physical residues. Artifacts, Implements & Images from the artist studio, 1991-2011 also introduces the principal themes: the body and the world, the coexistence of space and objects and the intellectual synthesis that prompts meaning by uniting the ceramics objects to our various senses.

Payce’s clay vessels use a sophisticated optical illusion to create human or architectural forms out of the negative spaces between the objects or by playing with their positive profiles. His inspiration comes from albarelli (plural of albarello), which are Italian ceramic apothecary jars, generally majolica ware, very popular during the Renaissance. Albarelli are usually tall, waisted shapes that can be picked-up easily from a pharmacy’s shelf when tightly lined-up. For the exhibition, two small abarelli from the museum’s Italian Renaissance collection on the ground level have been displaced by Payce’s White Pair Vases (2004) and relocated in the artist’s own display, one floor above, in the Focus Gallery. This smaller square gallery is cleverly situated at the centre of historical collections in order to promote a dialogue with its various holdings.

On the third level, in the first of the two large contemporary galleries, Entre La raison et la passion (2008), employs the space left from the contours between the two white porcelain vases to form the profile of a human head: the portrait of François-Marie Arouet de Voltaire (1694-1778), the famous French philosopher of the Enlightenment. The vases are cleverly set on a small antique cabinet, in turn placed in front of a series of five large lenticular photographs in which they perform as the main actors. This setting allows viewers to see the series The Customs and the Spirit of the Nations (2011), titled after Voltaire’s most famous essay, as framed by the philosopher’s profile. Voltaire’s An Essay on the Customs and Spirit of Nations (1756), perhaps his most influential work, uses history to demonstrate that the greatest advancement in knowledge occurred when there was the greatest freedom of thought. Payce’s The Customs and the Spirit of the Nations is composed of five sub-themes, corresponding to the five lenticular photographs: Candide, Halcyon, Occident, Orient and Vanquish. In this series, the potential of lenticular photography to integrate viewers is brilliantly exploited. Lenticular photographs convey the illusion of 3D and motion and are familiar images in smaller size novelty versions. But contrary to these popular versions, the scale of The Customs and the Spirit of the Nations is simply striking. Walking back and forth in front of the lenticular photographs gives the impression that one could pass through the apertures between the vases. In short, one is physically and conceptually invited to embody Voltaire/Payce’s perspectives of the world. Voltaire as an empiricist, valued knowledge gained through the senses, which makes Payce’s reinterpretation/reactivation very appropriate. In The Customs and the Spirit of the Nations: Candide, the background between/behind the profile of the philosopher is a remediation of Payce’s Kiss (2001), a work displayed on the second level, in the Focus Gallery. Voltaire’s novella parodies many adventure and romance clichés. Kiss is composed of stacked black and red vases in which positive profiles take the shapes of kissing figures of different genders. The variety of possible hetero- and homosexual positions is very well supported by the destabilizing effect of lenticular photographs. The stacked vases in Kiss reappear one more time in Lip synch 2011, a narrow and long lenticular photograph that elongates the vases and makes us revisit for a third time the figures striving for a fleeting kiss. Moving in front of these lenticular photographs, one’s sense of identity dissolves to some extent, and brings about disorientation in which ‘inbetweenness’ is made as concrete as ‘objecthood.’

Lip synch is located on the wall that separates the two top-floor galleries. The second gallery is occupied in its entirety by large-scale video projections of remediated ceramic objects, including Carpet for Helen (2011). With this work, Payce once more finds an unusual way to concurrently seduce our intellect through our senses. Projected on a large lush white carpet, images, scaled exactly to fit its contours, give the illusion of an infinite sampling of decorative rugs. Visitors are invited to walk on the thick carpet with its countless virtual identities; doing so brings about the perception of the interplay between concepts and concrete experience. One leisurely walks through tacit knowledge. The images consist predominantly of ceramic decorations, many from the Gardiner Museum, and reiterate the artist’s overall project to speak about the body and the world, the coexistence of space and objects, and ceramics’ ability to bring about significant embodied experiences.

Every one of Payce’s thoughtfully crafted works, of which I have discussed only a few, play expertly with liminal space/state characterized by ambiguity, openness, and potentiality or what Gogarty aptly refers to in the exhibition catalogue as pluriverse, that is, the notion that there are multiple ways of being in the world. Greg Payce: Illusions brings about a sympathetic connection between our bodies and our minds and invites us to inhabit/feel a space of vertiginous proximity between concepts and objects.

Mireille Perron is a visual artist, writer and educator, who was born in Montréal, Québec. She is the founder of the Laboratory of Feminist Pataphysics, and currently lives and works in Calgary, Alberta, Canada, where she teaches at the Alberta College of Art + Design.