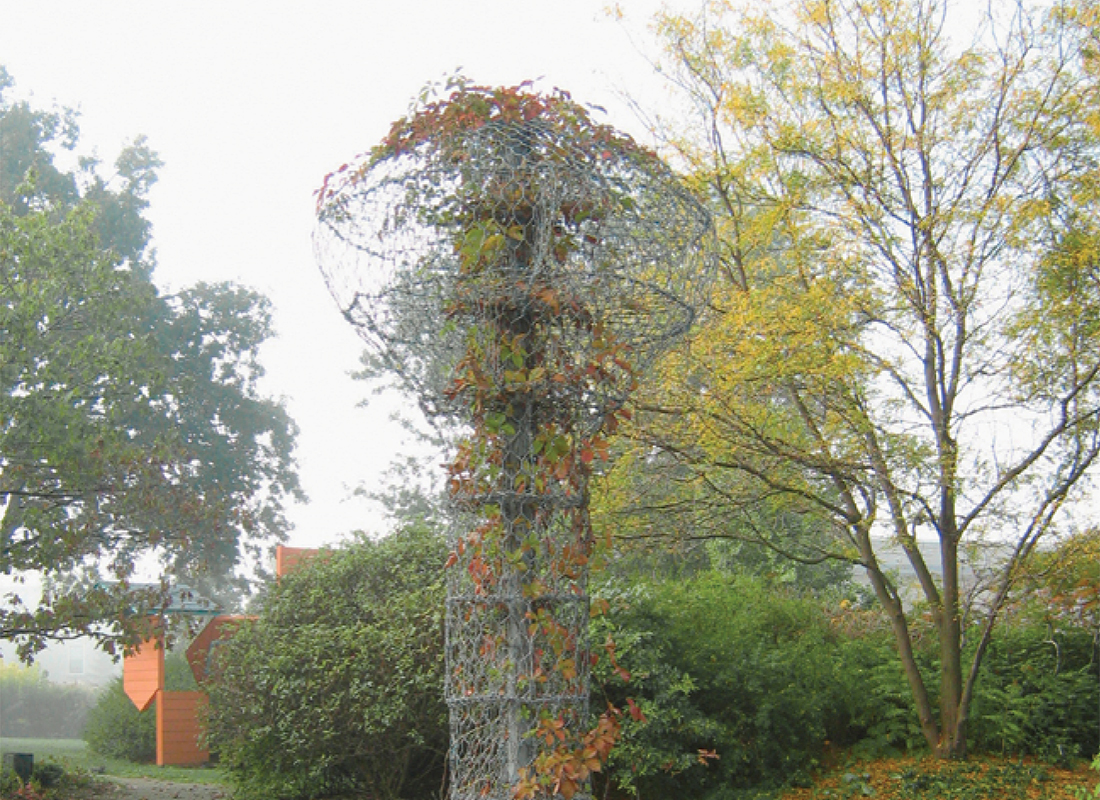 For an artist who is a sculptor by training, background and inclination, Kitchener-based artist Gareth Lichty does an awful lot of weaving. His work – typically large-scale and installational in nature – tends to foreground weaving in an aggressively sculptural way that transcends the quiet and aesthetically reserved two-dimensionality characteristically associated with the medium. So for a two-year site-specific installation mounted at the Cambridge Sculpture Garden, he utilized one of weaving’s distant industrial cousins as the primary aesthetic element.

At first glance, Gabion Tower (2012) isn’t an overly impressive work. Just under three meters high, it stands atop a slight rise of land in the middle of the garden. Some trees and bushes form a backdrop, shielding it from an adjacent roadway. A pathway curls around the other side, and a nearby bench offers a place to sit and contemplate the work.

But there’s really not all that much to look at. Essentially, Gabion Tower comprises a thick metal pole that rises up out of the ground and is encased in what looks like a circular cage. This is made out of chickenwire and becomes quite bulbous at the top of the work. It’s a shape that’s reminiscent of an old incandescent light bulb, or maybe an onion. Hardly stirring stuff.

But it’s a shape that’s ubiquitous in much of southwestern Ontario (and elsewhere, for that matter). In much the same way that grain elevators once distinguished virtually every community on the prairies, being by far the tallest things in town. In this part of Canada, the towns and cities tend to be distinguished by massive water towers that visually dominate their skylines. And they look pretty much like Lichty’s work, though of course on a much larger scale and constructed of steel and concrete.

So Lichty has transposed a civic shape, sculpturally reworking it on the grounds of a small, pleasant urban park along the banks of the Grand River in downtown Cambridge. And here, unlike its bigger kinfolk, it really dominates absolutely nothing. It’s far too small to do that; though rising higher than a person stands, it’s still pretty tiny in comparison to the surrounding trees and nearby buildings. And the fact is, given its context – a small but lovely patch of reclaimed urban land overlooking a river – it’s actually a bit of an aesthetically ridiculous-looking thing, comical, even. In many ways, Gabion Tower is the proverbial fish out of water.

But here’s where the passage of time becomes critically important in terms of shaping a meaningful aesthetic response to the piece, and it has everything to do with what the sculpture is fabricated from. The almost make-shift chicken-wire appearance of Gabion Tower is actually due to its being constructed out of so-called “gabion baskets,” woven-wire enclosures that are hugely important in the realm of civil engineering. Typically filled with rocks, these baskets, stacked one atop another and/or laid in rows, hold back hillside soil from eroding away, or safely channel the passage of water along rebuilt creeks or storm sewer systems. All but unnoticed, they are literally on the front line in terms of how our environments are reshaped to suit our purposes.

Which, at one level, is precisely what Lichty is doing here in the middle of a sculpture garden. This narrow green space, after all, is a relatively new phenomenon, displacing whatever had been here previous that displaced whatever had been here before that, etc. This is a constructed environment, deliberately reshaped to fulfill a specific role and for a specific use. So why not make manifest that truth in an aesthetic way by working with one of the fundamental devices employed in making our remodelled landscape?

Problem is, though, that unless you know what a gabion basket is, and that Lichty has in fact used them to build his sculptural tower, you would very likely miss that level of possible meaning. The piece still looks like chicken wire wrapped around a tall pole. And finally, here’s where time aesthetically figures in a very big way. In the days and months since its erection, the force of Nature has transfigured Gabion Tower through accumulation, into something of a large, rather oddly shaped trellis. Virginia Creeper, a species of ivy native to the region, was planted in the ground at the base of the sculpture, and over the course of time has grown up and through the work, using the woven wire of the open, unfilled gabion baskets as proverbial toe-holds as it makes its genetically predisposed climb upwards towards the sun.

And that, as they say, changes absolutely everything. Whole new levels of aesthetic meaning suddenly become available. Gabion Tower transcends its limited, slightly ridiculous-looking construction, and at last becomes something other. Now, it speaks to ideas and processes such as the entropic quality of the world, about how Nature inevitably reclaims our works, breaking through, for example, the carefully and expensively lain pavement of a roadway to flower into something we’ve tried very hard not to allow. Or, here in an expensively reclaimed bit of land in the heart of a busy urban environment, overcoming a sculptural intrusion by slowly, incrementally, and quite intentionally enveloping it courtesy of an aggressive species of climbing ivy. With Gabion Tower, Lichty has presumed to give Nature the final say; given enough time, little of his work would be visually evident to us, having been completely and utterly subsumed to the slow, quiet imperatives of the natural world.

And of course that means there is another form of weaving going on here, one that’s way beyond Lichty’s wired-together sculptural network of basketry. Nature has grown in and through and around it all, rerooting itself, just as intended via Lichty’s simple, profound gesture of planting a seed that will, in a sense, utterly consume what he has wrought. The weave of the world has been made manifestly present.

Gabion Tower is about many things – some of them indeed purely aesthetic – but perhaps foremost amongst them is that it speaks volumes about letting go of artistic and aesthetic intentions, about the idea of allowing the negation of an artefactual thing. Here, in Cambridge, Ontario, in a small garden overlooking the Grand River, Gareth Lichty has all along been shaping a true aesthetic of disappearance.

Gil McElroy is a poet, critic and independent curator living in Colborne, Ontario.