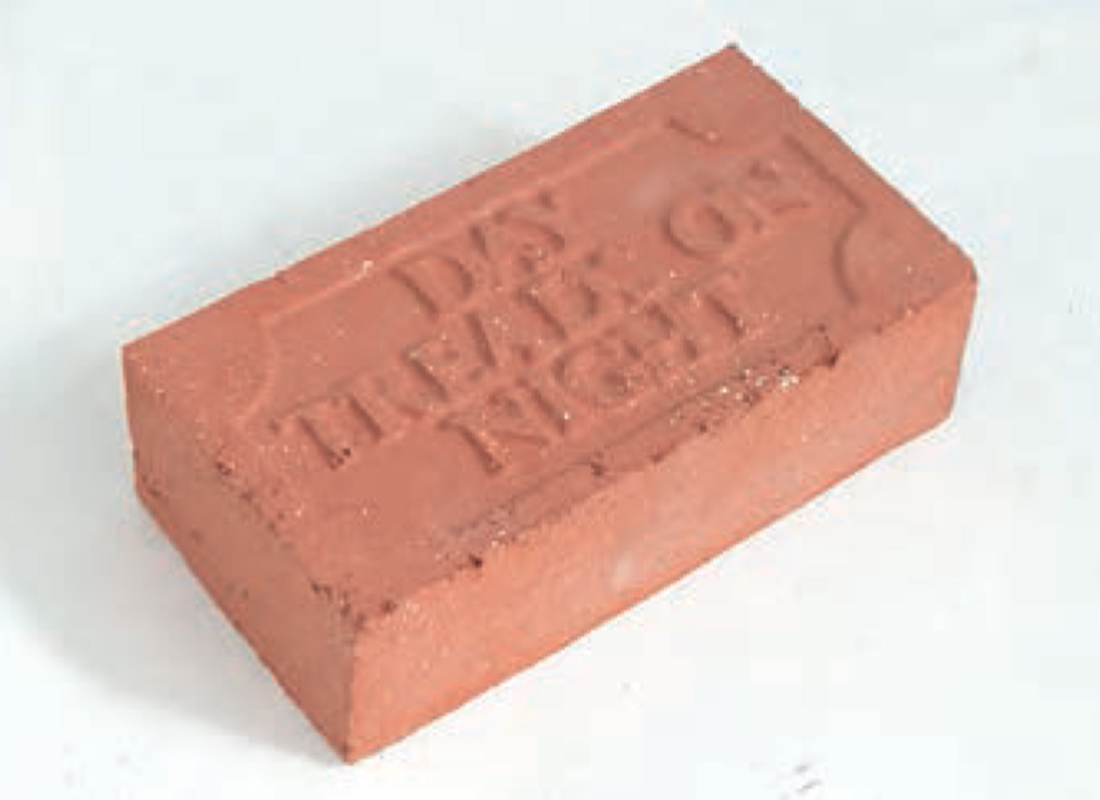 However we see our world, it is very much through the acquisition and use of language, especially speech, that we individually make our peace with it. Even though speech seems to be deeply, consciously organized and controlled, it also contains the unconscious, the spontaneous and the unpredictable. One of its mysteries is that we can begin a sentence without being able to find evidence within ourselves of having worked out in advance how that sentence will end. Yet to have begun, to have been able to correctly place one word after the next to build a coherent thought, we must have done precisely that.

Richard Clements’ Day Treadeth On Night demands language, but is also deeply engaged with mystery and arcane knowledge. It is animated by those qualities of speech that surpass language, and is an appeal for us to see not just with our eyes, but to reconnect with the material world and see with our bodies. Language is important but not more so than things like the hard shine of copper, the roughness of sand cast aluminum and the soft slumpiness of string.

Of the eight works, three are exemplars of Day Treadeth On Night as an extended meditation on the way the mind inscribes itself on the material of the world. Day Treads On Night (After Gill) are two brick-like sculptures that look like those of Carl Andre after Lawrence Weiner has gotten his hands on them. Imprinted with a contemporized version of the titular Day Treadeth On Night, they are inversions of Night Treadeth on Day by the English sculptor Eric Gill (1882-1940). Whereas Gill’s “brick” is carved stone and unique, Clements’ are of clay and cast plaster, and infinitely reproducible. In terms of sculptural material and process, the latter are pale ghosts of the former, but all three are literal renditions of concept imposed on material.

gutter/trough is a “U”-shaped length of copper open on one end and capped on the other. The capped end is lifted up off the floor on two mahogany wedges. In terms of transporting a flow, it gives the sense of being unidirectional, of having a beginning and an end (at least it makes me want to believe it has a beginning). It makes me aware of how I’ve been conditioned to read subtle cues to natural forces like gravity and the flow of liquid, but also to read familiar forms in terms of their resemblance to their prosaic, functional relatives.

Inspiration for gutter/trough is largely ecclesiastic, stemming from St. Paul’s Cathedral in London, and Bernini’s The Ecstasy of Saint Teresa. In St. Paul’s, it has to do with the way the light fills the interior, and the pull of its main aisle towards the alter. Looking up at its golden vaulted Nave, it’s possible to imagine it as a copper trough. With Saint Teresa, it’s the hard shafts of gilt bronze sunlight that stream down behind her; like spirit made manifest in flesh.

Through the marks of Teresa’s ecstasy, Day Treadeth On Night builds its metaphor to include the mind inscribing itself on the body. Teresa lies in the foreground, eyes closed, lips parted, her figure dematerialized in a cloud of drapery. An angel stands above her holding the arrow that has repeatedly pierced her body and caused her transformation. Look at the shaft of that arrow: it’s an echo of the light, and of gutter/trough.

Bernini achieves meaning through representational narrative, Clements opts for embodying ideas in objects that represent only themselves but which, with a little bit of imagination, project way beyond themselves. In the Kabbalah of Rabbi Isaac Luria, ten vessels meant to contain the emanation of God’s light (including the 22 holy letters, which helped form the building blocks of the universe and the structural elements of all things) were unable to do so and six shattered. As their pieces fell through the void, they trapped within themselves sparks of the divine light, which became shrouded in layers of darkness. These “husks,” or “complexes” as they’re called, compose the world in which we live. Our task, and opportunity, is to extract the sparks from their husks and thereby redeem the world.

The connection to Clements’ work, is the way it so readily offers itself to projection beyond itself. It can happen very quickly. In the moment of looking, you’re already not in this world, you’re beyond it, seeing all the other art, and all the other things a particular work reminds you of. Like seeing all the vessels already restored and full of light, beyond Clements’ gutter lies another gutter full of light.

Untitled (The Olympics) is obviously not a representation of the Olympic symbol. There are three circles not five, and the rings are not shown flat. The games are brought to mind (the circles are doing something of a little gymnastics routine), but so are the Chinese Linking Rings. The magic of the Chinese rings is the mystery of how they fit together and come apart. (Untitled) The Olympics reveals there is no magic by revealing its construction. We can see the legs that hold the rings aloft and the seams where the steel is cut and joined. What Clements really is giving us are the three most obvious ways to show a circle: flat, upright, and receding at forty-five degrees. If careful, we can imaginatively reconstruct the experience of how the rings are made. What we cannot experience, though our minds tell us otherwise, is that perfect geometric figure called a circle.

When Clements looks out at the world, he understands that he sees it as his mind arranges it, and overwritten by language. Clements’ work, like Gill’s, concerns itself with process but doesn’t make it the subject, and harbors a latent Christianity; and as in Luria’s story, it contains the desired search to repair the rifts between language and the world. It gives a simple demonstration that beneath the many ways we may organize the world, there is an unchanging material on which our ideas work

Dion Kliner is a frequent contributor of essays and reviews about art to catalogues and magazines. In between bouts of writing, Kliner works as a sculptor. His current interest is in working exclusively with plaster in a project known as “The Whore of Art.”